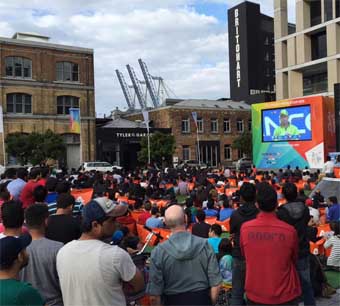 As part of its involvement in the ICC Cricket World Cup 2015 Fanzone, the city of Auckland has launched a Fanzone in the Britomart Precinct, where almost every tournament match will be screened live and free to the public.

The Fanzone has set out to transform Takutai Square into an urban village green, with 47 ICC Cricket World Cup 2015 matches showing live on the big screen – beginning with the opening match between New Zealand and Sri Lanka on Saturday (14th February).

The Fanzone is being delivered by Auckland Tourism, Events and Economic Development (ATEED) on behalf of Auckland Council.

ATEED Chief Executive Brett O’Riley says the Fanzone will be a great place for cricket fans to get together and watch the tournament.

O’Riley explains “Auckland will host four ICC Cricket World Cup 2015 matches, but we want to extend the reach of the tournament and create a second home for cricket fans to enjoy the live cricket action.

“The Fanzone provides a great opportunity for residents and visitors to Auckland to take part in the overall tournament experience and watch matches being played across New Zealand and Australia in a relaxed setting.”

Other ICC Cricket World Cup 2015 public activities taking place in Auckland during the tournament include an ‘adopt-a-second team’ and street dressing programme being held in town centres throughout the region, and a weekend match day Fan Trail stretching from the Fanzone to Eden Park.

New Zealand’s Black Caps will also be officially welcomed to Auckland at the Fanzone at on 25th February, with fans able to meet the team before they take on tournament co-host Australia three days later at Eden Park.

The Fan Trail will be in action on each of the three weekend Auckland games on 28th February, 7th March and 14th March with themed entertainment based on the competing countries.

Fan Trail ‘dressers’ will be dressing the crowd in the participating teams’ colours for free, and encouraging walkers to join the parade of fans along the Great North Road section of the trail from 1pm, led by different musical performers on each game day.

For more information on the Fanzone and Fan Trail visit www.aucklandnz.com/cwc2015.