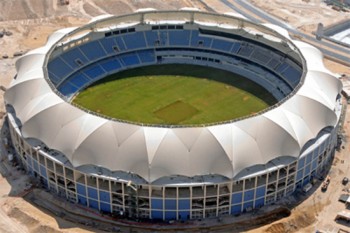 After more than three years and at a cost of US $100 million, the 25,000 seat cricket stadium at Dubai Sports City (DSC) has been officially opened.

The opening of Dubai's first cricket stadium has been called "the realisation of a dream" by DSC Chief Executive U. Balasubramaniam, and was inaugurated with a one day international cricket match between Australia and Pakistan. The venue will serve as a venue for international and domestic cricket as well as hosting a significant number of international entertainment events.

As Balasubramaniam explains, "just three years ago, the founding partners of Dubai Sports City set out to build one of the world's best cricket stadiums, and today we have realized that dream.

"This stadium, together with the ICC Global Cricket Academy which is located onsite, will serve as a global centre of excellence for cricket. Tomorrow's match between two of the world's best sides is further testament to the potential of this facility as a truly international venue for test, one-day international, and Twenty:20 cricket matches."

From its inception, Dubai Sports City board members set out to build a best-in-class facility, to International Cricket Council standards, from the design of its roof structure based on the traditional Arabic tent, to the meticulous detail shown in the construction and maintenance of the pitch which simulates playing conditions on surfaces from three different continents.

The Dubai Sports City Cricket Stadium is bowl shaped, providing excellent views from every seat in the ground and simultaneously bringing the spectators closer than ever to the action.

Dubai Sports City's cricket stadium will be the first of four stadiums to be completed, with a 60,000 capacity multi-purpose stadium for football, track and field, and rugby; a field Hockey Stadium capable of holding up to 5,000 spectators, and an indoor arena that will house 10,000 supporters for a wide range of sports including basketball, indoor hockey, volleyball, handball, netball and ice hockey.