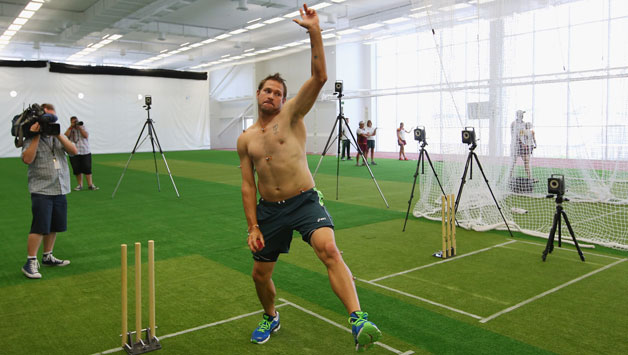 The new $29 million facility, based at the Allan Border Field in Albion, features state-of-the-art indoor and outdoor training facilities and equipment that will enable coaches and sports science staff to enhance the development of Australian cricketers, helping them prepare for the demands of domestic and international competition.

It includes an indoor training centre with a variety of simulated match surfaces that will help players hone their skills on pace and spin friendly wickets.

A new rehabilitation centre includes a three-lane, 25-metre lap pool and a hot and cold plunge pool. It also houses three medical consulting rooms, a physio treatment area and a gymnasium with an anti-gravity treadmill that will assist in the rehabilitation of injured players.

Cricket Australia's High Performance staff will operate out of the new building that will also include two lecture theatres named after former Australian stars, Ricky Ponting and Karen Rolton.

Welcoming the opening, Sutherland said the National Cricket Centre will provide the support Australian cricketers need to excel on the world stage, stating "our vision is for cricket to be Australia's favourite sport and a sport for all Australians. There are many things we need to do to achieve that. Men's and women's teams that are on top of the world game are key to Australian crickets popularity.

"This new facility will help us with that objective, through its work supporting the champions of today and tomorrow.

"True to its name, the National Cricket Centre will be a resource for players across the country. It will allow young cricketers coming through the system to benefit from world-class facilities and outstanding coaching staff.

"Off the field, the National Cricket Centre is an important symbol of collaboration.

"The project is a great example of how governments and sport can work together to achieve great outcomes.

"Thanks to the Federal and State Governments and the people of Queensland Cricket, we have been able to create a cricket training facility that is second to none."

Queensland Premier Campbell Newman also expressed his Government's support of the Centre and of cricket in Queensland, stating "the Queensland Government is proud to support this state-of-the-art facility as we're big believers in the role sport plays promoting healthy lifestyles, especially among our children.

"This is an impressive addition to the Allan Border Field precinct, which will provide cutting edge training and development opportunities for our top cricketers, coaches and umpires."

13th May 2013 - NEW CRICKET CENTRE OF EXCELLENCE CLOSE TO COMPLETION