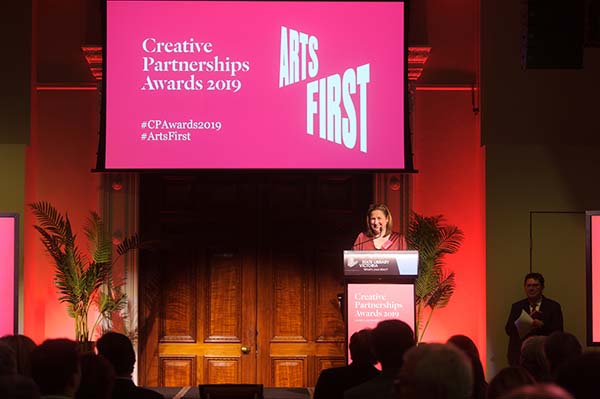 Seven individuals who show leadership in philanthropy and business partnerships with the arts sectors have been honoured at the 2019 Creative Partnerships Awards in Melbourne.

Those recognised have demonstrated active involvement in developing private giving to the arts, promoting the value of supporting the arts to the broader community and display an ongoing commitment to a strong, sustainable future for Australia’s cultural sector.

Creative Partnerships Chief Executive Fiona Menzies advised "eEach of the winners for this year’s awards have shown an enduring passion for Australia’s arts sector. Their contribution to fostering a vibrant, diverse and thriving arts culture, as well as their vision to encourage others to share this passion, is the reason we celebrate them today.

“I congratulate each and every one of the 2019 winners. The Australian arts sector benefits from a combination of support from all levels of government, alongside business partnerships and gifts from individuals and trusts and foundations, all of whom value its contribution to a thriving and cohesive community.”

Creative Partnerships Australia has led the awards scheme since 2013, embracing the legacy of the Australian Business Arts Foundation Awards, which celebrated excellence in partnerships and private sector support to the arts for more than a decade.

The 2019 Creative Partnerships Awards winners are:

Arts Leadership | David McAllister AM
David McAllister AM joined The Australian Ballet in 1983 and was promoted to principal artist in 1989. After taking his final bow as a dancer, McAllister became Artistic Director in 2001 and has been an invaluable champion of both philanthropic and corporate support for the company. Most notably for his leadership in increasing donor engagement and continuing The Australian Ballet’s key corporate partnership with Principle Partner Telstra, now in its 35th year.

Business Leadership | Joint winner | Ian Kew
Ian Kew is the Chief Executive for Airport Development Group Pty Ltd, which has interests in Darwin International, Alice Springs and Tennant Creek Airports. A long-term supporter of the arts in the Northern Territory, in 2017 Kew was appointed Chair of the Darwin Festival, Darwin’s premier arts festival. Since his appointment Ian has secured significant business sponsorship for the Festival, leading the event to two record-breaking years of attendance, with the 2018 festival the most successful season in Darwin Festival’s 39-year history.

Business Leadership | Joint winner | Helen Carroll
Helen Carroll is Curator of the Wesfarmers Collection of Australian Art and manages Wesfarmers Arts, a program that provides $4 million annually to the performing and visual arts nationally. Through Carroll’s advocacy, Wesfarmers’ involvement in the arts has been championed by the company’s managing directors, senior executives and board, creating enduring partnerships that underpin the ongoing sustainability and vitality of arts organisations in Western Australia. This support is demonstrated through their long-standing Principal Partnerships with West Australian Opera and West Australian Symphony Orchestra, as well as increased corporate support with West Australian Ballet and Black Swan State Theatre Company.

Emerging Philanthropist | Dr Terry Wu
Dr Terry Wu is a specialist plastic surgeon and a passionate supporter of the arts. He currently serves as a board member of the Australian Centre for the Moving Image (ACMI) and of the Australian Centre for Contemporary Art (ACCA). Dr Wu is a member of the Venice Council of the Australia Council for the Arts and a member of the International Council of Tate (UK). In 2014, Dr Wu initiated a partnership that established John Street Studios in Brunswick East, accommodating 12 visual artists with quality and long term affordable working spaces in the inner city. He extended this approach to performing arts in 2018, launching WXYZ Studios in North Melbourne with Lucy Guerin Inc., providing studio and office space for Lucy Guerin Inc, as well as studio space for emerging choreographers and artists.

Philanthropy Leadership | John Gandel AC and Pauline Gandel AC
John Gandel AC and Pauline Gandel AC’s philanthropic support for the arts has been exemplary. Over the past 40 years since the establishment of their first philanthropic entity, the John and Pauline Gandel Charitable Foundation, they have jointly distributed more than $100 million dollars to arts organisations and programs including significant support for regional arts organisations. In 2012, funds donated by Pauline established the Japanese Gallery at the National Gallery of Victoria, the first of its kind in Australia with a further $2 million donated in 2018 to strengthen the NGV’s holdings of Japanese art and design. Their $1 million donation created the popular Pauline Gandel Children’s Gallery at the Melbourne Museum providing a vibrant discovery space for children to explore, play and learn. John and Pauline’s philanthropy is not limited to their home state of Victoria, recently contributing $7 million to the National Gallery of Australia redevelopment.

In 2019 Creative Partnerships Australia announced a new award category, the Arts Visionary Award. This award honours those who have made a significant contribution to the arts over a period of time, leading to a new understanding of the arts in Australia and enabling the presentation of art that would not have been possible without philanthropic support.

Arts Visionary | John Kaldor AO
John Kaldor AO has been a dedicated collector, patron and supporter of contemporary art since the early 1960s and has participated on the boards and international councils of arts organisations across the world. Kaldor has brought innovative and ground-breaking art to Australia through Kaldor Public Art Projects, an organisation that this year celebrates its 50th anniversary. In 2011, Kaldor gifted his private collection to the Art Gallery of New South Wales, bringing these works into public view for all to enjoy.

For more information go to www.creativepartnershipsaustralia.org.au