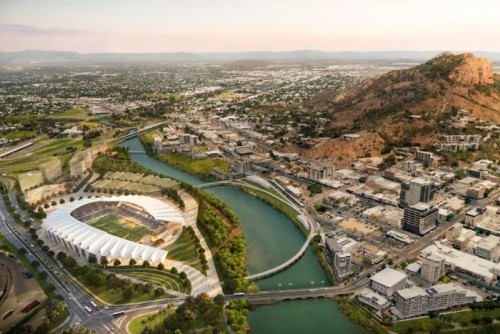 The Queensland Government has announced that a design by Cox Architecture as the winning submission for the new North Queenland Stadium in Townsville.

Cox Architecture, responsible for the Sydney Cricket Ground Northern Stand and the redevelopment of Adelaide Oval, will lead a multi-company team, including Townsville's 9Point9 Architects, working on the design, engineering, hydraulics and landscaping for the new $250 million venue.

A spokesperson for acting Queensland Premier Curtis Pitt said Cox’s design was inspired by the Pandanus tree, and would have a tapered roof and a grassed area that would look out to Magnetic Island.

Townsville Mayor Jenny Hill said it could become a nationally recognised building, stating “(the stadium) may very well become quite an iconic building, not just for us in north Queensland, but around Australia.”

However, the Queensland Government said it had been disappointed that local contractors were slow to express an interest in the construction of the project.

Major Hill said she was hopeful that would change, adding “they've got time over Christmas now to be involved before the master or the tier one contractor is announced.”

The new venue is expected to be finished in time for the 2020 NRL season.

Image show the preliminary design for the North Queensland Stadium.