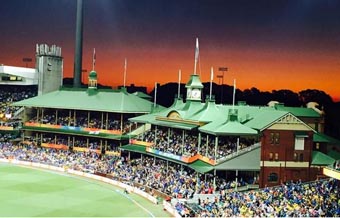 Cox Architecture is pleased to be involved in the development of next generation domestic and international cricket stadia at the SCG. The Northern Stand redevelopment is the first project of the master plan being developed by the Sydney Cricket and Sports Ground Trust and the second stage of the SCG redevelopment, following the Victor Trumper Stand in 2008.

Cox Architecture's design proposal will reinforce and rejuvenate the time-honoured traditions and character of the world famous SCG. The new Northern Stand will be designed as a pavilion to complement the SCG's legacy and heritage.

In its role as lead architect, Cox Architecture will provide the next evolution of stadia design in Australia to create a lasting legacy for the city and community of Sydney.

Cox Architecture Sports Director Alastair Richardson explains "Cox Architecture is delighted to be part of the redevelopment of this unique cricket ground. The twenty-first century cricket stadium is being defined by the changing shape of the game. The Northern Stand redevelopment will celebrate the heritage of the Sydney Cricket Ground while showcasing the next evolution of stadia design and leading cricket's future."

The project is due for completion in time for The Ashes Tour in 2014.

For more information go to www.coxarchitecture.com.au