Counting Made Fun at Luna Park 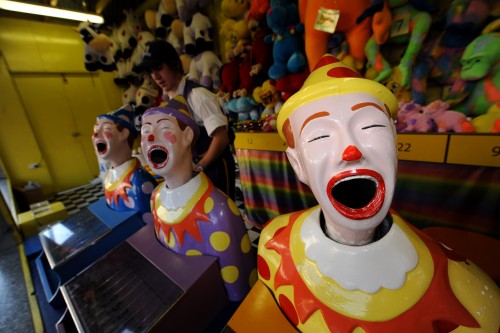 A free to enter, un-gated venue, Luna Park wanted to be able to accurately count the number of people entering the site without causing any physical obstruction which might distract from the iconic entry.

Luna Park already used Centaman's Enterprise solution for a variety of applications including ticketing, POS & Membership so they consulted with Centaman Systems as to their options for people counting.

Two outdoor thermal scanners where linked together to monitor the four metre wide entrance of the park and they accurately count people coming and going, even when they are walking closely together in groups.

The Traffic Insight software, in turn, logs all the counts from the sensors allowing the system to provide accurate real time counts of population levels as well as later reporting back on hourly counts of pedestrian traffic in and out of area thereby providing valuable pedestrian traffic data to Luna Parkâs management team to help with its strategy and decision making.

Luna Park's Lorcan Kinsella explains "as an un-gated venue which only has tickets for individual rides it has always been hard for us to know exactly how many people have been in the park from day to day. The thermal sensors have proven to be a very accurate counting solution and with it we can make detailed analysis of the average spend per head of our visitors and the data from the system is also impacting on our marketing activities, signage, staffing levels and sponsorship."

Luna Park Melbourne has been an icon in Melbourne since its opening in December 1912.

Some of the original attractions included the Scenic Railway roller coaster, the River Caves, the Pharaohâs Daughter, the American Bowl Slide, the Palais de Folies, the Ferris Wheel and numerous American slot machines (that used dimes).

These days Luna Park remains a galaxy of amusements and sensations. From the jaw dropping, eye ball popping super thrill rides like the Pharaohâs Curse, Metropolis and the Enterprise, to the exhilarating rides like the Spider, Twin Dragon, G force and Shock Drop that have been attracting families for nearly 100 years.

Centaman Entrance Control is the exclusive distributor for some of the worldâs most prestigious entrance control brands that are used to protect leading corporations, governments, leisure and education facilities as well as retailers around the globe.

For information click here to contact CENTAMAN Systems via their entry in the Australasian Leisure Management Supplier Directory.