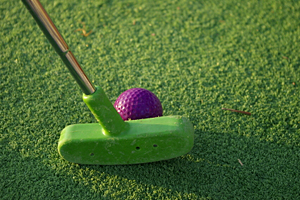 Rockhampton Regional Council has agreed to repair and replace the mini-golf, dragon slide and bouncing pillow at the 42nd Battalion Memorial Pool in North Rockhampton.

While operating as Rockpool Waterpark, the facility had three waterslides, three pools, a mini-golf course and a rock climbing wall.

However, according to a report in local newspaper The Morning Bulletin that equipment has lay a dormant since council bought back the centre in 2012 for $1.5 million after a Workplace Health and Safety audit found 270 safety breaches.

Since Cyclone Marcia, even the Olympic-sized pool which initially remained open, has been closed to the public.

In a full meeting of the Rockhampton Regional Council last week, the Council heard the outcome of an investigation into the leasing of the mini golf area at the facility.

Council was faced with a choice of restoring mini golf, dragon slide and bouncing pillow to be offered for lease, or demolishing the facilities and leaving the area open as part of the overall site.

The officer's recommendation was to demolish the facilities and receive a cash settlement of $521,097, plus the cost of the dragon slide, from the council's insurers.

Rockhampton Regional Mayor Margaret Strelow said she had hoped to include funds in the recent budget for new waterslides, but Cyclone Marcia had prevented that. 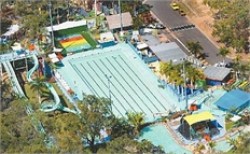 She said she did want to see mini-golf back at the centre and Councillor Cherie Rutherford agreed it was a community asset she did not want council to let go of.

The Mayor moved a motion to restore and replace the equipment, which was carried, will see the Council lease the completed facility with the operator able to charge an additional fee for use.

Council will be required to carry out community consultation to determine support for any commercial activity on this land, causing delays which could see the equipment not replaced in time for the December school holidays.