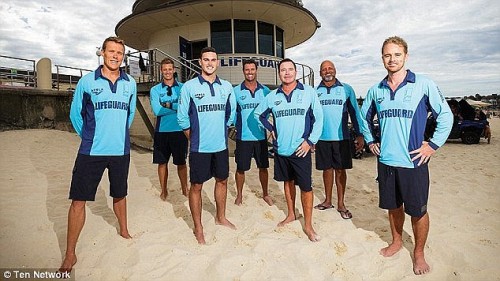 As it enters the filming of its 11th season, award winning Channel 10 show Bondi Rescue has been embroiled in a series of allegations published in mainstream media.

The show's stars, all professional lifeguards with Waverley Municipal Council, are reportedly facing a Council investigation into claims that the lifeguards received tens of thousands of dollars in payments from Red Bull and Mars.

Documents allege these payments, along with merchandise from Billabong and 2XU, was divided between the lifeguards, potentially in breach of the Council's code of conduct.

Leaked emails reported by the Mail Online show that Bondi Rescue is in turmoil with allegations of infighting, one drunken lifeguard being sent to rehabilitation and anger at the crew's leader for taking his wife to retrieve a dead body.

Stars of the show have also attacked chief lifeguard Bruce 'Hoppo' Hopkins' leadership - especially his decision to take his wife Stacey, who is not a lifeguard, on a jetski to retrieve a body.

In a letter to fellow lifeguards last March, which was seen by Sydney newspaper The Daily Telegraph, Hopkins wrote "this may have not been the absolute correct thing to do but I felt it was the best option at the time.

"This will be the last time I send a group email explaining myself on things, mostly my personal life."

Hopkins was also forced to defend himself against concerns about his business trips overseas and claims that he was receiving too many free tickets to sporting events.

In the letter he said that he had funded every trip and told his colleagues that the "schoolyard talk has to stop".

Bondi Rescue Producer Ben Davies revealed there was a clash between 'personalities' on the show, telling The Daily Telegraph "(Hoppo's) not there for the guys to love him, he's there to get the job done and if they don't like the way he runs it and he's the boss, they can always leave."

Lifeguards have also claimed there is a 'severe alcohol culture' in Bondi Rescue with one team member sent to rehab for three weeks after an incident at a hotel.

An inspection was carried out on the operation in September last year to ensure it was meeting the Council's drug and alcohol policy.

The Council is also investigating claims that of third-party deals, including that $10,000 from Red Bull was split between the lifeguards.

Responding to the allegations, a council spokeswoman stated "Waverley Council takes seriously any allegations of breaches of the Council Code of Conduct. These matters raised are being investigated."