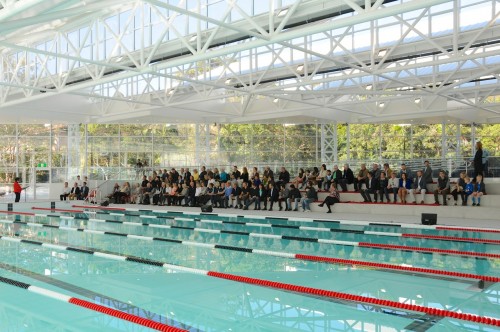 Officially opened by the former Mayor of Manly, Jean Hay on Saturday 11th June 2016, the $17.5 million redevelopment will open to the public in August.

First proposed in 1996, the development was approved by the former Manly Council and the Joint Regional Planning Panel in December 2013. However, the upgrade was dogged by controversy with vocal opposition from a group of local residents and dissenting Manly councillors.

As each stage of the development the objectors disputed issues such as need, parking and cost.

Most recently, the cost of using the fitness facility within the complex led to local newspaper headlines that it would “be home to the most expensive gym on the northern beaches, charging more than $2700 a year for membership.”

However, in opening the new facility, Hay stated “it’s incredible’, and “with all due respect to the naysayers, I just hope they go down and have a look at it.

“If people don’t want to use the new facility, they can keep using the old pool as they always have, but they will find it has better heating from the cogeneration heating system, so there will be a huge saving in energy bills.

“The cogeneration system will provide the energy for the whole complex - heating and airconditioning.”

The Centre was opened in the presence of NSW Premier and local MP Mike Baird; Mark Ferguson, the new General Manager of Northern Beaches Council and about 100 guests including former Olympians and community members.

The opening ceremony was also attended by the Centre architect, Michael Davies, Principal of TompkinsMDA Architects, his consultant team and the builder, FDC Constructions Pty Ltd.

In designing the new structure, Davies developed a triangular pool hall building that fitted into a tight space at the rear of the site in order to maximise retention of the existing views over the adjoining LM Graham Reserve.

The new Manly Aquatic Centre is of particular interest due to the degree of integration the architect has achieved between the new facility, the existing pools and the site on two of the three sides of the 45-degree triangular shaped building. 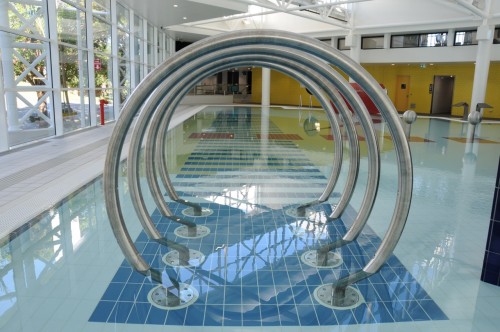 The new building is also elevated one and a half metres above the existing ground level to the same level as the existing centre in order to avoid flooding and to facilitate integration of the new indoor and outdoor facilities.

The roof structure of the pool hall building comprises Davies’ signature ‘saw tooth’ roof form which admits a very high level of glare free daylight from the south. The trusses are a massive 3.6 metres deep and the longest one has a clear column free span of 61.2 metres from east to west.

The development also includes a separate building adjoining the Kenneth Road entrance, which comprises new facilities for use in conjunction with the adjoining LM Graham Reserve and the Co-Generation Plant. These facilities include two team (male/female) change rooms, accessible change room, kiosk, secure bicycle storage and a new bus shelter.

Items of particular interest are:

The vast open space of the Pool Hall and the high level of natural glare free daylight provided by the south facing roof lights and six-metre-high controlled north orientated glazing.

The planning arrangement which groups the family oriented leisure pool and the pamper area comprising spa sauna and steam room on one level with the 25 metre lap pool and program pool on the lower level contiguous with the outdoor 50 metre pool.

The Leisure Pool floor has a tiled design by the architects influenced by Wassily Kandinsky, the influential Russian painter and art theorist who is credited with painting one of the first purely abstract works. Kandinsky taught at the Bauhaus School of Art and Architecture from 1922 until the Nazis closed it in 1933

Despite the level changes throughout, the whole of the facility and all of the pools are completely accessible.

The new structure has been built alongside the existing facility’s outdoor pools which comprise a 50 metre, eight lane competition pool; a 25 metre pool and a children’s wading pool.

In opening the Centre it was announced that the 25 metre indoor pool would be named the John Devitt pool, honouring John Devitt AM, former sprint swimmer, winner of two gold medals in the 1956 and 1960 Olympics and a continuing member of Manly Swim Club since 1947.

The new Manly Andrew ‘Boy’ Charlton Aquatic Centre will be featured in detail in the September/October 2015 issue of Australasian Leisure Management.

Images: The opening of the Manly Andrew ‘Boy’ Charlton Aquatic Centre (top) and a waterplay feature at the new pool (below).