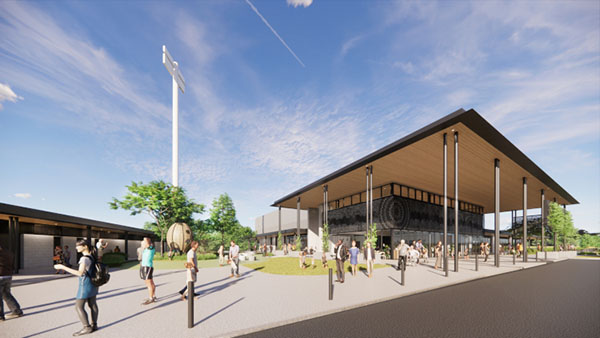 Coffs Harbour City Council advises that following a competitive tender process, Lahey Constructions Pty. Ltd. has been chosen as the principal contractor for the construction of the Wiigulga Sports Complex.

Tenders were called following the completion of the detailed design by Populous. Work will begin next month with completion due in late 2022.

Lahey Construction Manager Matt Fearnley notes ‘’as a local Mid North Coast builder for over 70 years, Lahey are delighted to be awarded the Wiigulga Sports Complex project as it’s a project that is very important to the local community.

“Lahey has longstanding relationships with many local subcontractors and we look forward to working collaboratively with Coffs Harbour City Council to deliver this prestigious sports facility for the community.’’

Coffs Harbour Mayor Denise Knight adds “this is probably the most exciting moment so far of this prestigious project, which is funded by all three levels of government.

“It’s the biggest Council project ever to come to Woolgoolga and I know there is huge anticipation locally to see the building work finally begin.

“We welcome Lahey Constructions to the project – their previous experience and professional team will be an asset to the project and like many locals I can’t wait to see construction begin very soon,” said Nikki Greenwood, Council’s Group Leader City Prosperity.

“Following our expression of interest late last year for local tradies, I know the community will welcome some familiar faces to the site once the contracts are finalised and building is underway.

“A similar EOI was carried out for the hugely successful upgrade of C.ex Coffs International Stadium and over 40 local businesses were eventually employed on that build. We hope to see just as many locals engaged this time around, if not more.”

The Wiigulga Sports Complex project was made possible through joint funding by the Australian Government through the Building Better Regions Fund, a State Government election commitment funded in the 2019-20 Budget under the Stronger Communities stream and Coffs Harbour City Council.