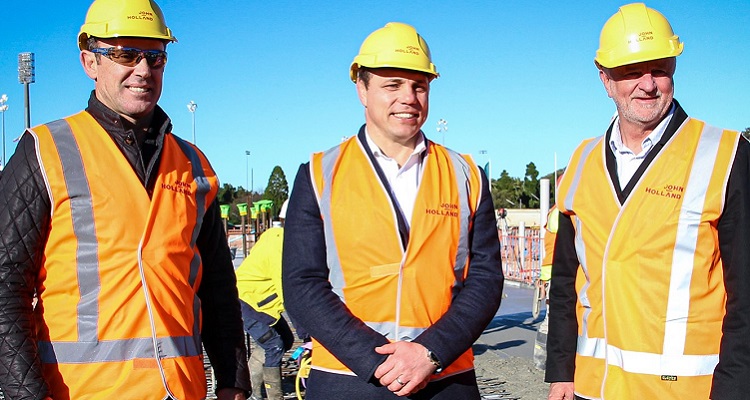 Work on the construction of the new-look Sydney Football Stadium moved forward today with foundations being laid for the new ‘dual-configuration’ venue at Moore Park.

Socceroos coach Graham Arnold, former Wallaby Phil Waugh and NSW State of Origin coach Brad Fittler were on site as the $730 million rebuild got underway, with 40,000 metres³ of concrete being poured for the venue’s foundations.

With work having been delayed as the initial contractors who demolished the venue being unable to meet the NSW Government’s requirements to rebuild it, acting NSW Minister for Sport, Geoff Lee insisted that the rebuild will be finished in time to host the 2022 NRL Grand Final.

The acting Minister told the News.com.au website “we’ve always made the commitment that it will be ready for the 2022 NRL Grand Final (and) it’s absolutely on track according to our schedule.”

acting Minister Lee went on to insist that Coronavirus issues will not impact the building of the 42,500-capacity venue, despite the use of staggered shift times and social distancing rules on site. He added “John Holland has done a remarkable job.

“COVID hasn’t slowed it down (and) it’s on track at the moment.

“This is another exciting milestone setting the foundations for the Stadium to start rising from the ground.”

The new Sydney Football Stadium has been was designed to have two modes, a 30,000-seat ‘club’ layout with a screen masking the top tier of seats, which would be removed to allow 12,500 more fans to watch marquee football and rugby matches.

The rebuilt stadium is scheduled to host the NRL grand final in October 2022 as well as matches at FIFA’s Women’s World Cup in 2023, which Australia will co-host with New Zealand.

The venue, which hosted five matches at the 2003 Rugby World Cup, will also be a cornerstone of Australia’s bid to host the tournament in 2027.