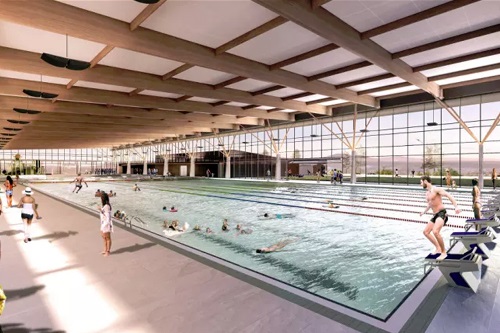 After almost a decade of planning, construction has commenced on the $36.6 million Stromlo Leisure Centre.

Set to service more than 100,000 people in the fast growing suburbs Weston Creek, Woden and the Molonglo Valley plans for a new indoor pool at Stromlo have been under development since 2010. In 2016, the ACT Government set aside $33 million for the facility in the 2017 budget - to include a 50 metre lap and competition pool, a program pool for activities like swimming lessons and aqua aerobics, a reception, kiosk, administration offices and change rooms.

However, subsequent community consultation identified aspirations for a gym, a leisure and toddlers’ pool, splash park, crèche and more seating throughout the centre - with a further $3.6 million in funding subsequently allocated for these facilities.

The gym will be at least 700 metre², with cardio equipment, pin-loaded weights, functional training, free weights, as well as a group fitness studio. The gym area will also have its own dry change rooms - male, female and unisex.

As well as the eight-lane lap pool, the leisure pool will be more than 200 metre² in size and include a toddlers pool. 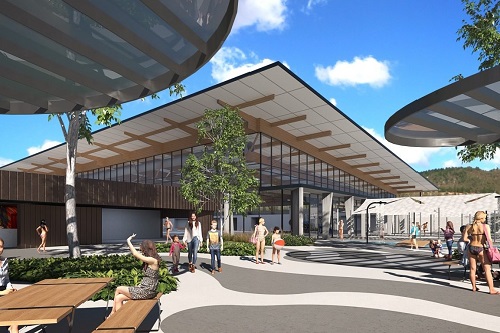 Welcoming the start of works, ACT Sport and Recreation Minister Yvette Berry advised “facilities like this are so important for bringing active communities together, especially in an area like this with lots of young families."

Minister Berry added that the facility the centre would be an important asset for the growing Weston Creek and Molonglo communities and a welcome addition to the other ACT Government’s aquatic facilities in Dickson, Manuka, Civic, Tuggeranong and Gungahlin.

The construction of the pool is to be the beginning of Stromlo Forest Park's evolution into a vibrant sport and recreation precinct.

Construction is expected to be complete in early 2020.

Images: An artist's impression of the 50-metre pool at the new Stromlo Leisure Centre (top) and the exterior of the facility (below).