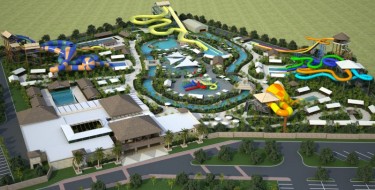 After seven years of planning, construction of the Adventure Waters waterpark in Cairns is finally underway.

The $45 million development, to be built on a 7 hectare block fronting the Captain Cook Highway to the north of Cairns, faced a series of legal, environmental and development challenges having been initially approved by the Cairns Regional Council in 2009. Funding for the project was also impacted by the global financial crisis of 2007/08.

Construction of the waterpark was set to commence last week, but even then wet weather prevented construction crews from breaking ground on the development.

While an old building on the site was demolished last week, construction crews broke ground on the site yesterday (Monday 6th July).

Backed by new investment and buoyed by the likely development of the nearby Aquis integrated resort, developer and former Cairns councillor Paul Freebody announced recently announced on the Adventure Waters website that the waterpark was set to be built.

Freebody wrote “we are now in full throttle getting the behind the scenes work under way (and are) in the box seat with our fully approved property being located across the road from the massive Aquis casino and hotel complex.”

Once both stages are constructed, the park will feature an array of water rides, including:

The waterpark will be a cashless attraction where visitors will be able to wear a wristband loaded with credit.

Gregg Construction has been awarded tender for the site, with civil works including the installation of a network of underground infrastructure now underway and the attraction scheduled to open in September next year.

The park, which is being funded by an Australian investor, will create about 340 jobs during its construction phase, estimated to last 12-14 months, and employ more than 200 people upon completion.

For more information go to www.adventurewaters.com.au