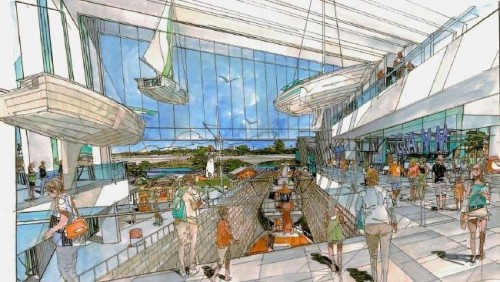 The Queensland Government has released details of a $100 million market-led proposal to redevelop the heritage-listed Maritime Museum as an aquarium.

Backed by the Queensland Maritime Museum (QMM) in partnership with Advanced Aquarium Technologies and Crossley Architects, the proposal is for a state-of-the-art attraction that could attract up to 750,000 visitors a year. Detailed design concepts for the attraction are expected to be available by the middle of the year.

The project, which would be in the heart of the popular South Bank Parklands precinct and linked to the planned Queen’s Wharf entertainment precinct by the existing Goodwill Bridge, has been received by the Queensland Government as part of its market-led proposal program.

While the Queensland Government is not involved beyond setting up the market-led proposal program,

Treasurer Curtis Pitt explained “we are working very closely with Crossley Architects to make sure that we get the balance right with ensuring we maintain the heritage values here and of course, providing an iconic new location, an iconic building which will see visitors coming from interstate and internationally to see this new facility.

"We are all very excited about it at this point. So in the middle of this year we would expect to be able to provide much greater detailed drawings for this and we hope we will be able to get things moving beyond that."

Queensland Deputy Premier Jackie Trad added “we know South Bank is an enormous magnet when it comes to not only domestic visitors, but also international visitors and national tourists to Brisbane.

"This will only take South Bank and this whole precinct to the next level - a world-class aquarium with a much enhanced Maritime Museum will just be an outstanding feature for South Bank."

The Maritime Museum-Aquarium proposal is the third project to progress to the detailed assessment stage under the market-led proposal program, which lets the private sector suggest ideas to the Government, instead of the Government putting proposals out to tender.

For more information on Market-Led Proposals, go to www.treasury.qld.gov.au/mlp

Image: An early concept design for the Queensland aquarium at the Maritime Museum.