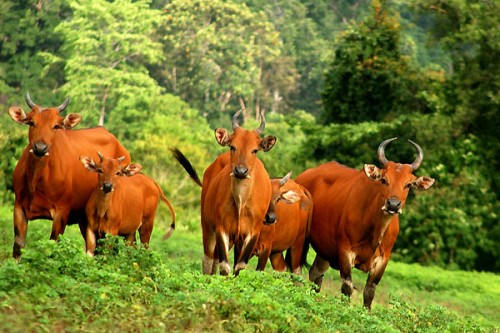 International conservationists and the global zoo community are joining forces with the Indonesian Government for the first time to support species conservation in the country.

Zoo associations in South East Asia, Europe and North America are linking up with the International Union for Conservation of Nature (IUCN), species specialists and departments of the Indonesian government to support the conservation on little known species: banteng and anoa (wild cattle), babirusa (a wild pig – a species where the teeth of males grow upward through the roof of the mouth and curve toward their eyes). Each are threatened with extinction, with two species being listed classified as Endangered on the IUCN Red List of Threatened Species, as a result of hunting for food and habitat loss.

This new approach to conservation aims to bring together the skills of top zoos - conservation breeding, animal husbandry, veterinary treatment, education, population biology - with those of local experts, conservationists and sanctuaries on the ground. Conservationists call it the One Plan approach, with international zoos and local experts sharing knowledge to work in a more effective way.

The international collaboration aims to build healthy global zoo numbers of the species as insurance against the loss of populations in the wild.

Tony Sumampau, representative of the Indonesian Zoo Association, explained "while the global zoo community is working with partners on educational efforts related to over hunting, we can make sure that there is a viable global captive population whose genetic diversity represents the genetic diversity in the wild.

“Because space and resources in zoos in only one nation or region are limited, a global collaboration may be able to ensure that enough animals can be managed to form a sustainable captive population."

James Burton, Chair of the IUCN SSC Asian Wild Cattle Specialist Group, also commented “this is the first global collaboration between zoos for the conservation of banteng, anoa and babirusa.

“While zoos cannot provide solutions for all conservation problems, they are one important piece in the puzzle. It will not be an easy task, but if we all work together, we have much better chances to save these species."

“The IUCN ... Group is very excited about this opportunity to achieve real positive conservation outcomes for the species.”