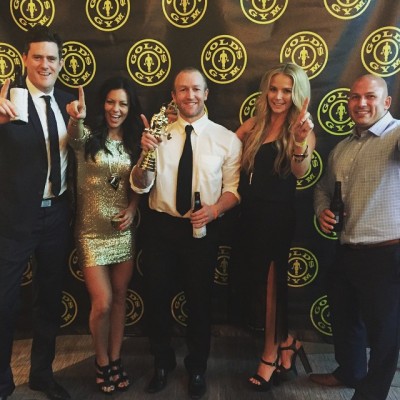 Taylforth, who in 2014 announced plans to develop 50 Gold’s Gym franchises in Australia, has enjoyed some success in the three years of his Master Franchise with 23 territories sold.

However, as of today, the Gold’s Gym Australia website lists only two clubs in Rockingham, Western Australia and Miranda, NSW.

Named as the top international master franchisee at the 2015 Gold's Gym Convention, Taylforth operated Gold’s Gyms in the ACT suburbs of Fyshwick, Gungahlin and Tuggeranong as well as Bondi Beach.

In addition, franchised Gold's Gyms have been operating in Brisbane, Cairns, Townsville and Wollongong and Miranda.

However, a recent statement from Gold’s Gym in the USA explains "effective Thursday, July 14, the following gym locations will no longer be affiliated with the Gold's Gym brand: Fyshwick, Gunghalin, Tuggeranong, Bondi Beach, and Townsville."

Taylforth told The Canberra Times "they hold ultimate discretion over that brand. I didn't see it coming in a million years, they always retain the right to do that sort of thing."

Gold’s Gyms operations have not been smooth over the past year.

Taylforth was reportedly in dispute with Christos Kyrgios, brother of Australian tennis star Nick Kyrgios, over franchise agreements at the Canberra clubs.

Christos Kyrgios had previously employed by Gold’s Gym to sell franchises and had claimed that he was owed about $300,000. Kyrgios also lodged a claim that Gold’s Gym  breached the Fair Work Act by failing to pay more than $112,000 in entitlements.

In addition, as of 14th July, the Townsville Bulletin reported that the North Queensland city’s Gold’s Gym had closed.

The gym also closed temporarily in March, reportedly as a result of a dispute between Taylforth and the landlord of the premises

Taylforth is also in dispute with Canberra builder Zoran Sever who worked extensively on the Townsville gym’s fitout, and who was reportedly owed about $1.3 million

The Gold’s Gym Townsville Facebook page has also been removed, while other Gold’s Gyms Australia social media sites and profiles are currently unavailable.

Comment has been sought from Gold's Gym in the United States.

Established in Venice, California, USA in 1965, Gold's Gym claims to be “one of the most recognised gym chain in the world” with more than 650 locations in 37 states and 28 countries. It claims to have nearly three million members worldwide.