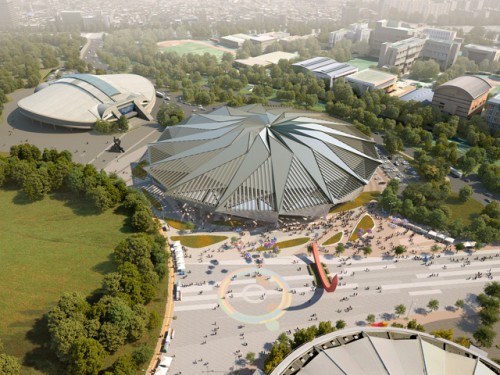 Organised by the Korea Sports Promotion Foundation, the competition sought proposals for the renovation of the existing 1988 Olympic Gymnastics Arena, which is located in Seoul’s Olympic Park.

The arena not only holds historic significance with its role in the 1988 Olympics but is also “the premiere cultural performance venue of Korea,” with its location inside one of the largest man-made public parks in Korea.

A statement from the architects said the design of the new K-Pop Concert Hall “was developed with the goal of establishing a new programmatic identity while preserving the historical and symbolic significance of the existing structure and façade as much as possible.”

The project will utilise the majority of the existing structure, but will expand the circular hall surrounding the edge of the building, to accommodate a wider range of retail and other event-related programs, as well as preparing it for any possible future expansions.

Much of the renovation will focus on the roof of the structure, with the architects explaining that it will be replaced by a “dynamic 3D truss system inspired by the form of a tornado, symbolizing the venue’s central role in the recent surge of global popularity of Korean pop culture.”