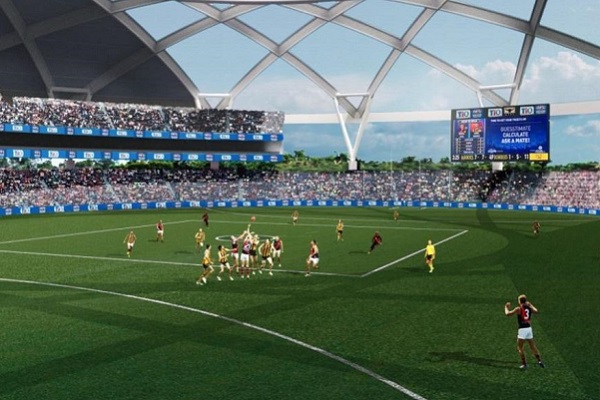 Concept designs for a new $300 million oval-shaped sporting stadium in Darwin have been released by stakeholders in the project.

As reported by NT News, Project co-ordinator and AFLNT Chairman Sean Bowden is working with a range of architects, structural engineers and designers to put plans in place for the 25,000-seat covered stadium in Darwin’s CBD to be up and running inside a decade.

The NT News reported Bowden as stating “we’ve put together a high-level design team made up of national recognised architects and engineers.

“We’ve been working carefully to develop the concept and build it to the point where we can present it to the public for consideration.

“From that we’ll get feedback from the start of what will be a detailed consultation process.’’ 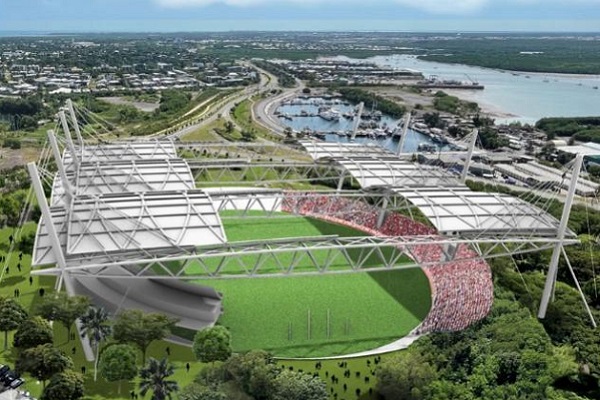 Included in the list of non-charging organisations involved in the design and construction process are Studio Nield, Coordinating Architects, headed by Lawrence Neild, the former Chief Architect of the Northern Territory who was involved in the planning a number of major projects, including Sydney’s Stadium Australia and Melbourne’s Marvel Stadium.

The NT News reported Bowden as saying the plans will go up on the AFLNT website tomorrow to give the public a look at the ideas and visions of the AFLNT and their stakeholders, with a view to providing input on where the venue plan are heading.

Despite the attractive designs being presented for the new venue, at this stage neither the Northern Territory Government or the Darwin City Council have made any statement of support or commitment to the project.

In addition, beyond Darwin’s hosting of one AFL game and one NRL game per season, the venue has no anchor tenant. A Northern Territory Government funded ‘scoping study’ into a potential AFL team based in Darwin and Alice Springs, tabled to the AFLNT board in September 2019e report has not yet been publicly released. 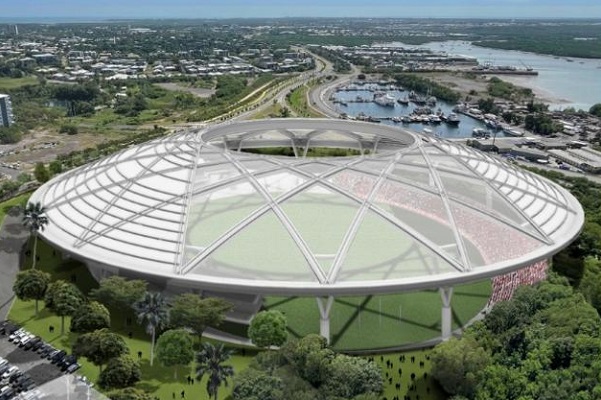 Nonetheless, Bowden was reported as stating that the venue will be “a multi-purpose stadium that will attract high level AFL games, NRL matches, IPL cricket out of India, Test and first class cricket … ‘Premier League soccer’ out of Australia and South east Asia or major events like ... Bruce Springsteen or Fleetwood Mac (concerts).”

He went on to advise “we think Darwin and the Northern Territory are ready for what we regard as the perfect concept.

“We want to see this stadium become the real heartbeat of the Northern Territory and something Territorians are proud of and designed with them as something iconic that also speaks to Australia and the world.’’

Earlier this year Bowden was reported as saying costings and where the money will come from would happen in the first half of 2021.

Located within the out-of-town Marrara sporting precinct, the 12,500-capacity TIO Stadium is the current home of AFL in Darwin.

Currently the Gold Coast Suns and Parramatta Eels having agreements with the Northern Territory Government to play home games at the venue.

Images: Artist’s impressions of the proposed AFL Stadium in Darwin, hosting AFL (top) and with differing roof designs (middle and below).