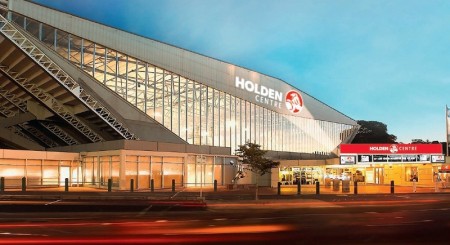 Collingwood Football Club and Holden have announced an extension to their three-year, partnership with the vehicle manufacturer taking on naming rights of the club’s headquarters at Olympic Park, now known as the Holden Centre.

The former Olympic Swimming Stadium - often known as The Glasshouse and which has also been known as the Lexus Centre and Westpac Centre under previous naming rights deal - is managed by the Melbourne and Olympic Parks Trust, at a location overlooking the Yarra River, the city and the iconic MCG.

CM Holden Executive Director of Marketing and Customer Experience, Geraldine Davys, said the newly named Holden Centre was an exciting extension to the brand's links with Collingwood, stating "the partnership is a great fit. Both Holden and Collingwood are iconic Australian brands with the biggest and most famous fan bases in the country (and) the Holden Centre is the perfect location to showcase this partnership.

“We share great synergies with the club, from our rich Aussie culture, to the passion and loyalty of our fan base, to our commitment to innovation, excellence and an exciting and bright future in Australia.”

Central to the Holden Centre investment is the recently completed community centre providing a first-class and safe sporting facility for women and the broader community – all in the heart of the biggest sporting precinct in the Southern Hemisphere.

This builds on Holden’s Home Ground Advantage community grants program and significant investments by local dealerships to position Holden as a market leader in the community.

Collingwood President, Eddie McGuire, said when Holden and Collingwood united in 2013 there was a natural fit and endless possibilities, stating "the alignment of Australia’s biggest and most famous sporting club with one of the nation’s biggest and most successful car companies, continues to make us both very proud.

“Collingwood and Holden Side by Side – you can’t get more Australian than that.”

7th May 2014 - NEW GEELONG GYM TO INCLUDE ALTITUDE TRAINING FACILITY