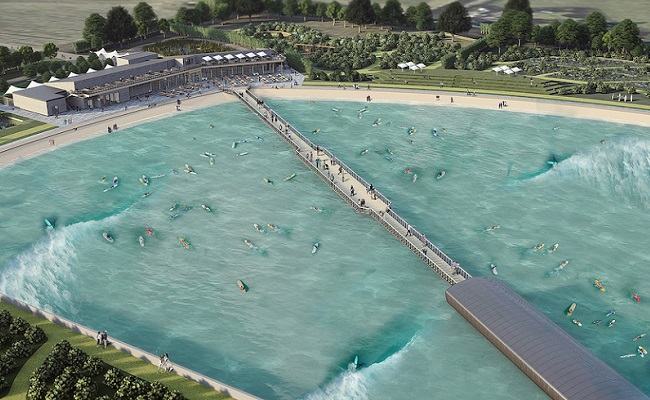 With Australia awaiting the announcement of an opening date for the URBNSURF attraction in Melbourne, destination development experts Colliers International have revealed that another Wavegarden powered facility will open in the west of England next month.

Sited near the city of Bristol, The Wave, the second surf park to open in the UK, will provide a unique combination of visitor attraction, health club, resort and sports centre with a brand ethos centred around the ideas of wellbeing, inclusivity and having fun in the fresh air.

Introducing the attraction, Matt Hyslop, Destination Consulting lead at Colliers International stated "this is innovation in the South West that is right on trend, far beyond the surfing itself.

“The Wave reflects innovative thinking in technology, business model and attitude, and is a perfect fit with modern consumer expectations.”

“While the principles are very similar to other surf parks, The Wave is really quite a different proposition, ii is the first destination in the northern hemisphere to offer Wavegarden Cove wave-making technology. This promises a lot of high-quality waves, for all abilities."

The lagoon provides up 1,000 waves of varying sizes and shapes an hour, with around one wave every 10 seconds. Heights start at 50cm and peak at 1.8 metres, providing sport for all ability ranges from first-timers to Olympic hopefuls.”

Hyslop sees the attraction as offering day-long surfing interaction for families, adding "since the 2008 (economic) crash, the ‘staycation’ trend has been prevalent in the UK. At first, it was born out of necessity with strapped-for-cash holidaymakers opting out of more expensive overseas trips. But since then, both consumers and the industry have realised we have an excellent visitor offer in the UK, with amazing places and experiences that hold up to international comparison.

“The Wave will help evolve and grow the sport of surfing, especially in the South West. Its innovative approach and offer should reach beyond surfing and is an internationally significant project of which Bristol and the South West should be proud.”

Colliers is a market leader in surf park development advisory and provided market viability and business planning services to The Wave.