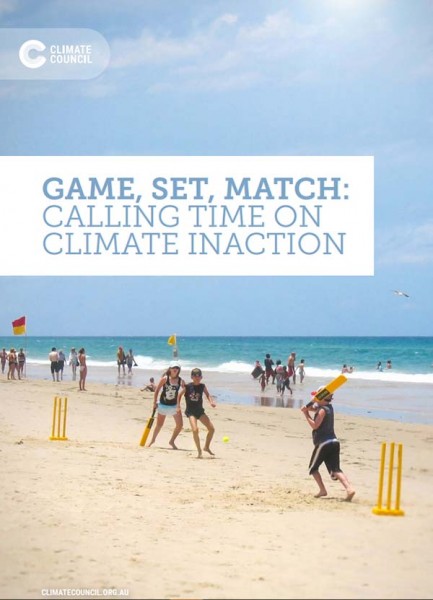 The Climate Council has released a new report, ‘Game, Set, Match: Calling Time on Climate Inaction’, which describes how climate change is affecting sport in Australia, and how sport can also be a powerful force for change.

The report highlights that while sport is a major part of Australian culture, Australia’s summer of sport is under threat from climate change. Driven largely by the burning of fossil fuels (coal, oil and gas), climate change is worsening extreme weather events and disrupting Australian sport.

The report states that by 2040, heatwaves in Sydney and Melbourne could reach highs of 50°C, threatening the viability of summer sport as it is currently played.

Climate Council Head of Research and lead author, Dr Martin Rice notes “if global emissions continue to increase, Australian sports will have to make significant changes, such as playing summer games in the evening or switching schedules to spring and autumn.

“No athlete, whether an elite professional or a community player, is immune to our increasingly hot summers, which are a health hazard for those playing and watching sport.”

The report finds that although Australian sport is worth $50 billion to the economy and employs over 220,000 people, governments are not adequately prepared for escalating climate risks.

Sport in Australia is identified as not only being affected by climate change but as a contributor to climate change. The report suggests that Australian Sport can be an integral part of the solution with athletes and other sporting leaders becoming powerful advocates for change, both within sport and outside of it, by using their star appeal to educate and influence others.

Dr Rice highlights “Sporting clubs and codes can rapidly cut their own greenhouse gas emissions by changing the way they build venues, power events, travel and by cutting waste.

“Professional and community sports can also switch sponsorship from fossil fuel-backed companies to ones that invest in climate solutions.”

Some of Australia’s most high-profile athletes have responded to the Climate Change Report’s call for greater climate action.

Pat Cummins is concerned about the threat that climate change poses to both professional and community sport and notes “like all Aussies, I was devastated to see the impact of the (2019/20) bushfires and the multiple coral bleachings on the Great Barrier Reef.

“I’m used to competing in a battle between bat and ball. The battle for climate change is, of course, a lot more important than just a game of cricket.

“We’ve seen athletes forced out of their events due to extreme heat and fire, and community cricket clubs forced to end their seasons early.

Former Wallabies captain, David Pocock who wrote the foreword to the Climate Council report adds “Australia punches above its weight in sport, winning gold and topping podiums, but we’re falling behind on climate action.

“We don’t have a credible climate policy. We could easily be a leader in clean technology, but our federal government is clinging to and subsidising fossil fuels, like coal and gas.”

Amy Steel played professional netball for 10 years, but her career ended in 2016 when she suffered heat stroke while playing indoors during a national pre-season tournament.

“I was physically the fittest and strongest I had ever been. I never could have imagined this would be the last game I’d play, that it would end my netball career.

“That incident left me with lifelong health issues, including chronic inflammation and fatigue. If this could happen to me - an elite athlete - then what are the risks for community sporting clubs, as climate change makes heatwaves longer, hotter and more frequent?”

Ace Buchan began surfing when he was five years old and has competed on the World Surf League professional tour for the past 15 years. Buchan is aware of the effects of climate change on Australia’s coastlines and adds “Greenhouse gas emissions from the burning of coal, oil and gas are altering the coastline we call home. Not only are regular wind and wave patterns being disturbed, but we are bearing witness to devastating coastal erosion, rising sea levels and bleaching and destruction of the reefs that we surf and swim over.”

Swimmer and Olympic gold medallist, Bronte Campbell said her home state of Queensland was especially vulnerable to climate change, concluding “Queensland is on the frontline of climate change impacts. But, like (our state does in) sport, we can also lead the charge with solutions like renewable energy.

“That is why I am coming together now with my fellow athletes, to use my platform, beyond the pool, to inspire and push for climate action."