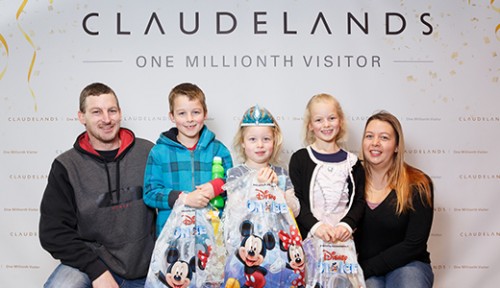 Hamilton venue Claudelands has recognised a five-year-old Disney on Ice fan as its one millionth visitor.

Aleisha Chadwick, who lives in Hamilton, attended the 11am Disney On Ice presents Magical Ice Festival show on 11th August with her parents Clayton and Annette Chadwick, brother Alex (aged nine) and sister Hayley (seven) where she was told she was the venue’s lucky one millionth visitor.

To mark the milestone Disney on Ice presented Aleisha and her family with goodie bags and invited the children to a special cart ride on the ice during the show.

Executive Director of H3 & Events Sean Murray says reaching the one millionth visitor is an exciting milestone, stating “we monitor our visitor numbers closely so have known that we’ve been approaching our millionth visitor for some time – we were thrilled when we able to pinpoint that it was going to happen during Disney On Ice, which is one of our biggest family events this year.

“Not only is it exciting for Claudelands but it is great for our city and region, and means that over a million visitors have experienced our award-winning venue and the great events taking place there since it first opened just over five years ago.”

Claudelands is owned and operated by H3, a unit within Hamilton City Council.