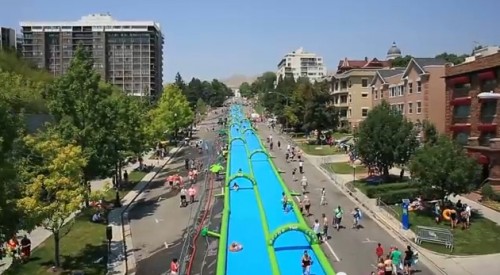 Having been operational since its first event in the Tasmanian city of Launcestion in February this year, the City Slider has been touring Australia, poping-up for high profile one-day events in town and city centre locations.

6 metres wide with two lanes and a layer of 35mm foam underneath for a soft landing the City Silder takes a crew of 20 more than eight hours to install.

Beyond Gosford, the City Slider will be heading to Rouse Hill in Western Sydney, Canberra, Bendigo, Wollongong and Adelaide in the coming months.

City Slider owner Matt Elmer of the Events People, said it was an exciting and unique concept in terms of size and fun.

Elmer explained "it’s really huge and is double the length of the MCG and very exciting,

“It’s a lot of fun for the family and we are making it as safe as possible.".

However, the City Slider's operations have not been with issues.

Subsequently, local media reported that ticketholders experienced delays with refunds, leading some to complain to the Queensland Office of Fair Trade. 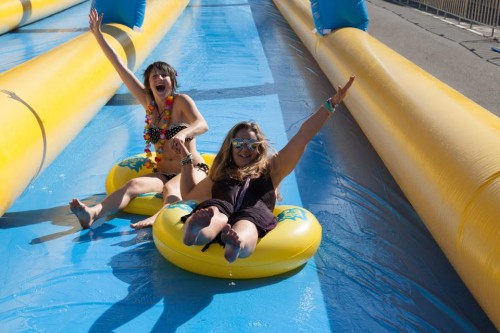 An event in Coffs Harbour was also cancelled after the local Council withdrew their support.

The Coffs Coast Advocate reported that the attraction had "garnered mixed reviews as it tours the country, with some ticket holders complaining of not enough water on the slide, and that the overselling of tickets resulted in only one or two slides per person in a 90-minute session."

Image: The City Slider in Port Kembla, NSW (top) and in action (below).