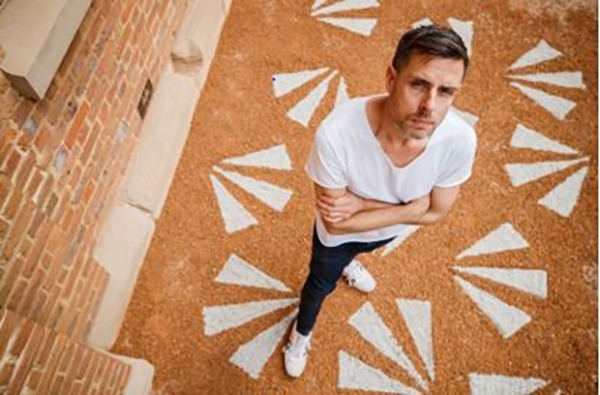 The major installation will comprise more than 2,000 maraong manaóuwi/broad arrow designs created out of red and white gravel sourced from Wiradjuri Country and laid across the entirety of Hyde Park Barracks’ courtyard.

For the installation’s three-week duration as part of the official reopening of the Hyde Park Barracks, visitors are invited to walk on top of the artwork, playing a part in its slow disintegration as the bichromatic gravel mixes together the emu tracks and broad arrows and bringing into focus the importance of protecting and preserving cultural sites.

Jones advised “this installation explores the site’s history within a contemporary framework. Both these symbols talk to specific cultural ideas – two different narratives embedded in the one landscape that continue to inform our society. At the heart of this project is how we construct history, how we live with history and how history overlaps and speaks to the different communities in different ways.”

Lord Mayor of Sydney, Clover Moore noted “we are proud to be working with Jonathan Jones and Sydney Living Museums on untitled (maraong manaóuwi) at the Hyde Park Barracks for our popular Art & About program. Art & About turns locations throughout the City of Sydney into unique canvases or unexpected performance spaces for temporary art projects, as part of our $37 million annual investment in the city’s cultural and creative life.

“We were delighted to work with Jonathan Jones in 2016 on his powerful artwork barrangal dyara - skin and bones - in the Royal Botanic Gardens and I can’t wait to see Sydneysiders and visitors engage with his new work, untitled.”

The emu is a significant animal to many Aboriginal communities; it is one of the few creatures where the father rears the young and thus speaks to community aspirations of strong family values around fatherhood. Conversely, the broad arrow is a symbol of imperial ownership and represents the convict labour force that was responsible for the expansion of Sydney and in turn, the dispersal of First Peoples from their homelands.