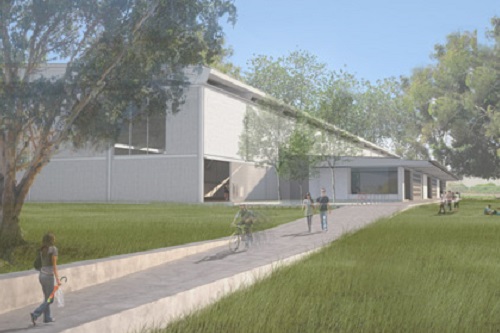 The City of Sydney is approaching the completion of its new sports precinct in the suburb of Alexandria that will cater for adult and children's sporting competitions.

Expected to open in late March/early April, the Perry Park Recreation Centre will consist of two indoor and two outdoor multipurpose courts for sports such as netball, basketball and futsal.

Development of the centre - which will also feature a kiosk, staff administration area, change rooms and an external terrace within landscape surrounds area – comes after close to 30 years of campaigning by the City of Sydney Basketball Association for a new sports stadium.

Located 700 metres from Green Square train station and next to the Bourke Road cycleway, the Centre is well positioned to cater for future community needs.

City of Sydney Basketball Association Director, Robert Van Houten said the new facility will enable the association, which has 2500 members, to nearly double its numbers and build the next generation of sporting stars.

Recalling that campaigning for a new facility started in the 1990s, Van Houten advised that the Association’s current stadium, which has just two indoor courts, has been around for 50-years.

Van Houten advised “from having this stadium for 50-years to having access to six courts in the next few years, is a big step for us and something we are happy about.

“This building hasn’t changed since I came in 1974 to play from the States. It is still the same building, the same two courts and the same stands.”

Despite their lack of playing space, the Association is one of the most successful basketball associations in the country.

Association General Manager Ben Osborne said the existing venue had long been at full capacity, commenting “we do feel like if we had 10 courts, we would fill it, but this is a really good start.”

“I want to get down to the grassroots level and get those young kids playing in this facility.”

A City of Sydney spokesman added “the courts will be allocated for regular periods to sporting and community groups, but will also be available for casual hire by the community.

“There is growing demand for sporting facilities by residents of all ages throughout the inner city which is why we’ve invested heavily in providing these facilities.”

Located 700 metres from Green Square train station and next to the Bourke Road cycleway, the Centre is well positioned to cater for future community needs.

The City of Sydney also plans to convert a warehouse in Alexandria into a major indoor sporting complex for local clubs and organisations.