City of Newcastle continues its ongoing support of women in sport 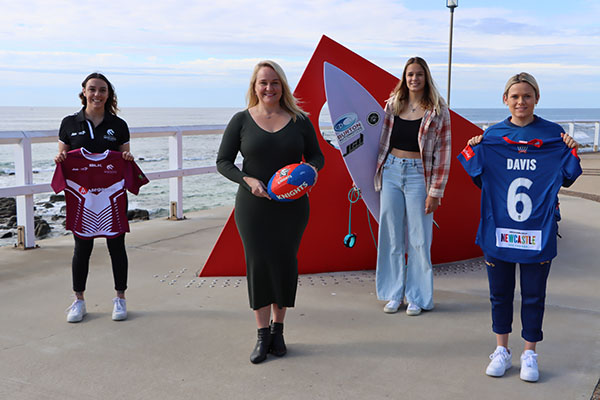 City of Newcastle is continuing its ongoing commitment to female sport by sponsoring a range of women's sporting events including rugby, soccer and surfing over the next 12 months.

In addition to its ongoing support of the Newcastle Jets W-League team, City of Newcastle has committed as a sponsor for the Newcastle Knights inaugural women's team's historic debut in the 2021 National Rugby League Telstra Women’s Premiership.

City of Newcastle will also bring the fast-paced Women's Rugby 7s to No.2 Sportsground along with the 'Girls Day Out' which features surfing clinics hosted by local Phillipa Anderson.

“City of Newcastle is committed to supporting local women's sport because of the range of health, wellbeing and social outcomes delivered by seeing talented female athletes show their skills.

“The City has over recent years worked to bring top female sports such as the Matildas to Newcastle and over the next financial year is investing $50,000 across the Knights, Jets, Women's Rugby 7s and 'Girls Day Out' clinics.

Newcastle Jets mid-fielder Cassidy Davis welcomed the ongoing support provided by the City of Newcastle and added “my teammates and I really enjoy playing at No.2 Sportsground as our home ground, thanks to the ongoing support of City of Newcastle. As a proud Novocastrian, I look forward to continuing to showcase Newcastle to the rest of Australia through televised matches and at our games.”