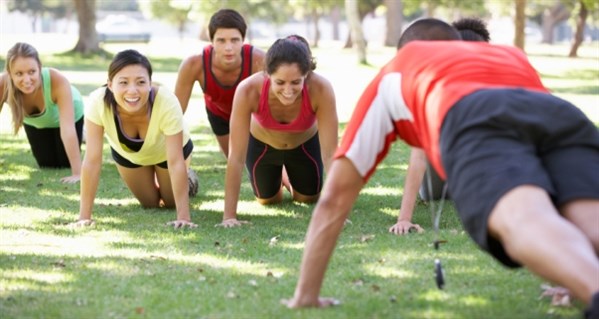 Aimed at improving the health of Hobart residents, as well as providing valuable social networks, the City of Hobart has been providing a series of free community fitness sessions during the summer months.

The city’s ‘Simple Sweat’ sessions have been running in the historic surroundings of Hobart’s St David’s Park on Tuesday evenings commencing since 13th January – continuing until 3rd March.

Run by qualified instructors from the Hobart Aquatic Centre, ‘Simple Sweat’ is a bodyweight cardio and strength based program to suit all fitness abilities. The program includes a flexibility component at the end of the class.

Sessions for two to five year olds were also run on Wednesdays in St David’s Park over a four week period between 14th January and 4th February, and are currently continuing for a further four weeks at John Turnbull Park in Lenah Valley until 4th March.

Lord Mayor of Hobart Alderman Sue Hickey said the Council is eager to add to the health and wellbeing of residents, stating “the program is aimed at providing outcomes for all levels of fitness, beginner to advanced.

“At a time when obesity levels are increasing, it’s very important to provide opportunities for people to ‘level out the load’ on their bodies.”

The Chairman of Hobart’s Parks and Customer Services Committee, Alderman Anna Reynolds said the Council, in conjunction with Life Be In It, is also providing free Mini-sports sessions for children.

Alderman Reynolds added “the program allows children to try four different sports, soccer, Australian Rules Football, basketball and cricket, and learn basic skills that can be transferred to other activities.

“The program is aimed at being fun and encouraging children to participate without being competitive.”

The City of Hobart provides numerous recreational facilities across the city including parks, multi -use tracks as well being owners of many major sporting facilities.

For more information click here to visit the City of Hobart’s Parks and Recreation Unit webpage.