A host of elite level Australian skateboarders joined City of Casey Mayor Shar Balmes at the recent reopening of the iconic The Shed skate park in Cranbourne East.

Councillor Balmes was delighted to re-open The Shed following the Councilâs investment of $1.2 million to turn the facility into the biggest and best indoor skate park in the southern hemisphere.

Councillor Balmes explained "The City of Casey is so pleased to be able to provide such leading-edge facilities for the Casey community, and, in particular, for our younger residents.

"The Shed has undergone an amazing transformation since it originally opened in 1993 and is now set to become Australiaâs best skate park catering for skate, BMX, in-line and scooters.

"The whole park is covered by a roof so it can be used rain, hail or shine and it has the ultimate ramp offering in Australia with a vert ramp, bowl, street area, foam pit and resi ramp."

At the official opening, professional skaters showed off the new ramps while local residents who won a competition to ride at the park's special opening event, joined the professionals and participated in a skate and BMX competition.

Councillor Balmes added that the Council âconstructed The Shed with assistance and advice from international professional skaters including Shane Serena (from 'Revolution ASC'), who skated at the original facility in the 1990s, Jeff Williams, Mike Daly, Nathan Beck, Bart Carnes and Andrew Mitchell.

"In developing The Shed, Council's vision was to build a facility for action sports that offers an exciting, safe and good value venue for all ability levels of participants in skate, BMX, in-line and scooters."

The facility is operated on behalf of the City of Casey by Skateparks Australia Pty Ltd involving many of the key staff who were previously involved with the development and operation of The Monster, Sydneyâs largest indoor skate park at Olympic Park. 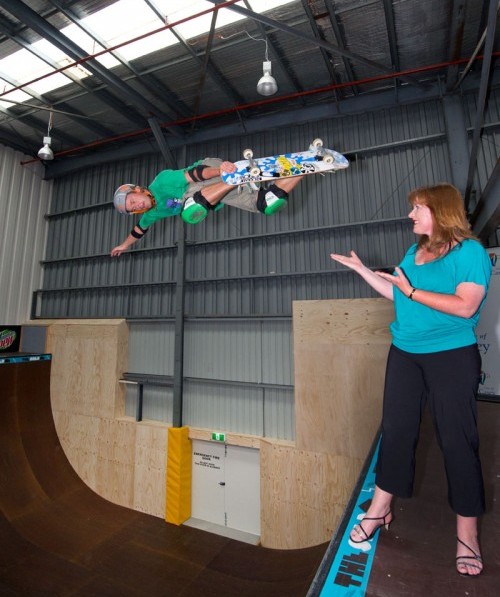 The Shed caters for all levels of ability and user groups with each day split into three-hour sessions. General session prices are $7.50 for three hours, making it the least expensive indoor skate park facility in Australia.

The facility also features spectator areas with chairs and tables, a retail shop, food and drinks plus the opportunity for people to participate in workshops, camps and parties.

City of Casey Manager Sport and Leisure Richard Amon added "some of the top professional skaters in the world have been testing the ramps in preparation for the opening and have commented that The Shed is now a world-class facility.

"I encourage everyone to jump online and visit the websiteto view the session times and other options."

Since opening, the response has been amazing with an average of 380 visits per day to the facility.

For more information go to www.theshedskatepark.com.au