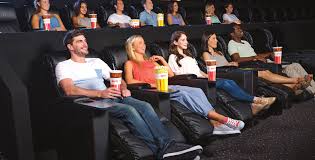 With cinema chains looking to match what many experience with in-home theatre, a trend is emerging for luxury and premium cinema fitouts and cinema experiences.

With Hoyts having pioneered this trend with its Lumiere and, more recently, Lux brands, the process has been accelarted since its acquisition last year by China’s Dalian Wanda group.

Undertaking an ongoing refurbishment of its 450 screens in Australia, up to 40% of seats are being removed and replaced by more luxurious reclining chairs.

The larger seats let cinemagoers recline in rows e spaced much farther apart than is customary, so that no one should have to stand to let other people through or should have the view of the film blocked by a head in front.

Late last year, Hoyts Chief Executive Damian Keogh told The Australian newspaper that cinema businesses  had for too long increased ticket prices without improving facilities and that the new seats were about delivering an enhanced “business class” experience.

Keogh explained “the value equation for the customer is significantly better in terms of the level of comfort they’re watching the movie in.”

Linked to improvements in seating have been lobby and concession upgrades.