Cinema visits rise in Melbourne but slump in Sydney 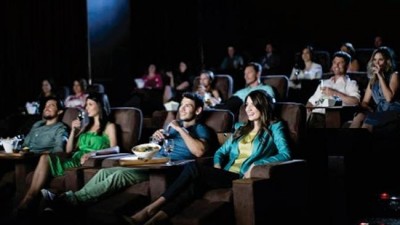 Melbourne has surpassed Sydney as the film-going capital of Australia with Melburnians making a record 20.66 million visits to the cinema last year, while Sydneysiders went just 18.28 million times - the fewest total visits since 1997.

Newly released data from Roy Morgan Research shows that most Melburnians (53%) went to the movies during an average three months in 2014 - but most Sydneysiders (53%) didn’t. Melburnians averaged 5.6 cinema visits each last year - equivalent to an extra visit per person compared with the mean of 4.6 in Sydney.

Between 1997 and 2014, Roy Morgan Research surveyed over 350,000 people (aged 14+) in Sydney and Melbourne about how often they went to the cinema. Until 2008, the total number of visits followed a similar trend in each city, with Sydney’s larger population responsible for its higher total.

But Melbourne had a boom year in 2009, pipping Sydney for the first time. The two cities were then neck-and-neck until the two diverged last year: in 2014, Melburnians flocked to the cinema and Sydneysiders found other things to do. 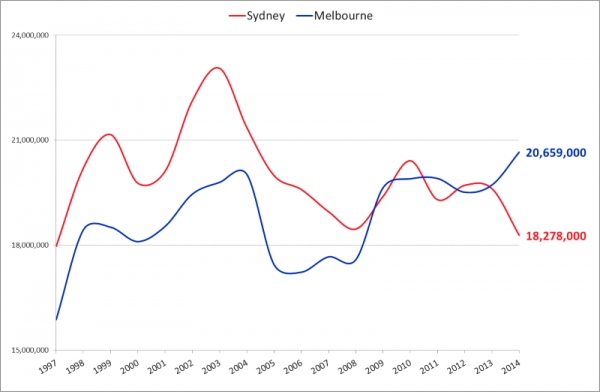 The average frequency of movie-going declines with age in each city. However, an ageing population means that those aged 50 and over actually made more total cinema visits than any other group: 6.6 million in Melbourne and 5.8 million in Sydney. Though they don’t go as often, nearly a third of all cinema visits in either city are now made by people over 50.

Frequencies and Total Visits in Sydney and Melbourne by Age 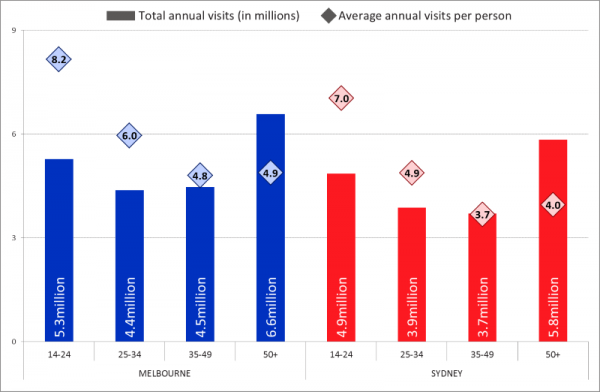 Commenting on the findings, Roy Morgan Research Chief Executive Michele Levine stated "Melbourne has firmly overtaken Sydney as the home of cinema-going in Australia. In 2014, Melburnians made over five million trips to the cinema within an average three month period, or over 20 million visits during the year.

“Although Australians go to the cinema less often than they did 10 or 15 years ago, these total visitation numbers show that there are still plenty of tickets sold and cinema continues to be an important part of our media landscape.

“Despite the hype surrounding big-budget animated, action-packed, comic-based or otherwise youth-oriented releases, more Australians today are aged over 50 than under 35. Older people currently go to the movies less often than younger people, but maybe they’d go more often if there were more films they wanted to see.

“Topping the box office for two weeks, The Second Best Marigold Hotel is one of the most-seen movies in Australia so far in 2015, alongside more youth-oriented sequels like Furious 7, Taken 3 and the next Divergent instalment. Perhaps in ten years more movies will be targeted at older audiences and they’ll be going more often to see them all—and the under-25s will be complaining there aren’t enough comic book sequels being made!

“As part of their mandate to develop relevant, successful projects that support and inspire the local film, TV and game industries, funding bodies like Film Victoria, Film NSW and Screen Australia need to understand their potential movie-going, television-viewing and game-playing audiences and in turn help content producers target the right markets.”

To understand how to reach Australians with different cinema preferences and visitation habits, contact Vaishali Nagaratnam of Roy Morgan Research on 03 9224 5309, E: Vaishali.Nagaratnam@roymorgan.com