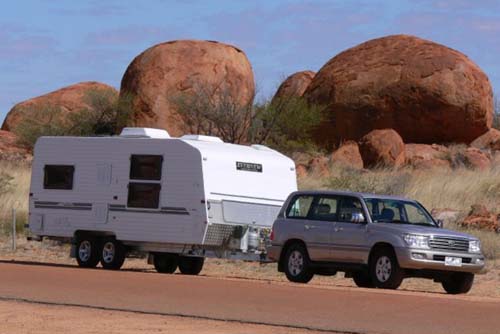 New research released by the Caravan Industry Association of Australia (CIAA) highlights the continued growth and strength of the caravan and camping industry across Australia.

CIAA explains that caravan registrations have experienced a higher rate of increase than any other vehicle type in the last two years, with research into the number of registered recreational vehicles (RVs) or motorhomes in Australia showing a jump year on year of 5% [1].

In 2013 the number of registered RVs in Australia was 528,869, jumping from 502,025 the previous year. Of these registered vehicles 474,783 are towed product (including caravans, camper trailers, tent trailers, and other towed RVs) while 54,103 are motorised (motorhomes and campervans) [2].

RV production statistics for May 2014 are up 7.4% since May 2013. They also show the highest towables production in at least six years and the highest combined total since March 2011 [3].

Caravanning and camping is a significant industry in Australia, accounting for $7 billion of expenditure annually, and representing over 60 million visitor nights [4].

These numbers are not solely the product of the 'grey nomad' (older people taking a long term camping trip around Australia) market - though these consumers remain significant. Industry data attributes this upsweep to younger families who are getting into the caravanning and camping spirit.

According to Tourism Research Australia, the largest consumer group in the industry is made up of 35 to 49 year olds, who account for approximately 50% of all travel in the sector [5]. This is further backed by the Alliance Strategic Research finding that the key current user group is 35 to 49 year olds, particularly families with children [6].

CIAA Chairman Mark Lindsay is optimistic about the future of cararavnning and camping in Australia explaining "every year we see more and more people getting involved and seeing the sensational sights Australia has to offer. Whether they’re doing a big trip in a caravan or motorhome, or just getting away for the weekend, Aussie families are making the most of the great outdoors.”

Lindsay sees a trend emerging of multi-generational families camping together, or grandparents taking the grandkids for a week away, adding “gramping is a phenomenon we’re seeing a lot of recently. It’s a great way to build inter-generational bonds, away from the routine of everyday life.

“Australia’s love affair looks set to continue with a KPMG Research Report into caravanning and camping demographics completed in July 2013 highlighting significant opportunities for the industry, finding the family demographic as the one most likely to grow into the future [7].”

• 67.8 million site nights were spent in the caravanning and camping sector in 2012, 45.3 million (67%) were in a caravan holiday park with above 40 sites [8]
• Expenditure by caravanning and camping consumers is approximately $7b annually
• 90% of all site nights are in regional Australia
• 90% of caravanning and camping activity is undertaken by Australian domestic travellers
• The largest user group is 35-49 year olds with approximately 50% of all travel in the sector
• There are 170,000 powered and unpowered sites available nightly in Australia. At an average occupancy rate of 54% this means 86,000 sites go unused nightly around the country [9]
• There were 528,869 RVs registered in 2013. Of these registered vehicles 474,783 are towed product (such as caravans, camper trailers, tent trailers, and other towed RVs) while 54,103 are motorised (motorhomes and campervans) [10]
• Caravan registrations increased 5.96% to January 2012 – the highest recorded against other motor vehicle types
• 85% of the Australian population has stayed in a caravan holiday park at least once in their life [11]
• For every $100 of caravan park revenue $138 worth of direct economic benefit flows through the local economy [12]
• Local RV production in the year ending December 2013 was 20,402 (19,441 towed, 961 motorised). It is estimated up to 10,000 units (mainly camping trailers) may also be imported on an annual basis [13]

13th September 2013 - SURGE IN CARAVAN AND CAMPING HOLIDAYS IN NSW

[7] KPMG The Impact of Demographic Change on the Future of the Caravan, Camping and Manufactured Housing / Manufactured Home Village Industry, July 2013