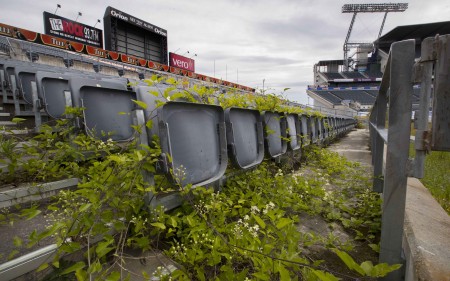 The demolition of Christchurch's Lancaster Park, damaged in the February 2011 Canterbury earthquake, is approaching, with the Christchurch City Council set to release a tender for its demolition.

As reported by Stuff.co.nz, the demolition is set to be the largest ever undertaken in New Zealand, with a 2016 City Council report estimated the demolition will cost about $20 million.

As the stadium now stands it has been stripped of its 30,808 seats, lights, boilers, memorabilia and anything else that could be reused.

All remaining fixtures, including carpets, lights and ceiling tiles, will be removed from inside the stands leaving just a concrete and steel chassis ready for demolition starting in April.

The Christchurch City Council decided in December 2016 that the stadium was "uneconomic to repair" after its repair cost rose to $275 million.

Council Project Director Lee Butcher said the demolition will involve the removal of 68,000 metre3 metres of material above the ground and 30,000 metre3 below the ground, totalling almost 100,000 metre3. The QEII complex demolition involved 23,000 metre3.

Butcher told Stuff that the demolition of Christchurch's 26-storey Grand Chancellor Hotel after the earthquakes was considered one of New Zealand's biggest demolitions – but three of those hotels would fit within Lancaster Park's stands.

He advised "it's huge, it's a big, big demolition. This is an epic demolition."

The 45-metre high Paul Kelly stand will be the first to go followed by the 40-metre high Deans stand about six months later.

The venue will be demolished using a mix of cranes and cutting equipment along with high reach machines. Huge water cannons will be deployed throughout the demolition to reduce dust.

Many of Lancaster Park's assets have been bought and are being used in new forms across the country.

Some of its lights went to a West Coast speedway, the boilers were being used to heat the hot pools at Franz Josef, and 16,000 seats have been distributed among community sporting venue.

Lancaster Park's war memorial gates are to be protected and preserved during the deconstruction.

The Council has yet to decide the land's future use with plans for the city's replacement major venue focussing on a more central site in the city.