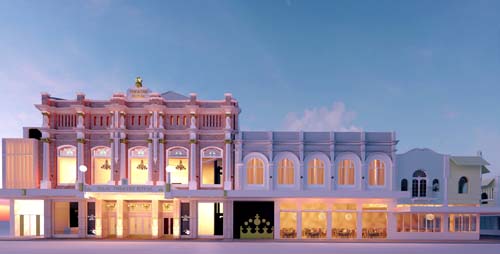 The Isaac Theatre Royal, the ‘Grand Old Lady’ of New Zealand theatre will reopen her doors for performances on 17th November.

The 106-year old theatre has been undergoing a $40 million rebuild and restoration project having been closed for almost four years after being damaged in the September 2010 and February 2011 earthquakes.

With the project set to be completed over the next five months, the rebuild of the theatre is seen as ‘shining light’ in the recovery process of the city and the rebuild has gained recognition and support across the globe.

Theatre Chief Executive Neil Cox said he is looking forward to once again welcoming the large scale theatrical productions the ITR has been famous for since it first opened in 1908.

“The theatre has staged the best in the world and the best of our own world-class talent during its illustrious 106-year history.”

Cox said the rebuild project will see the theatre restored once again to her superb original Edwardian-style, and will be celebrated once again as the South Island’s premier venue for the performing arts.

He adds “it has been a massive project of love and belief to get this beautiful old venue back on its feet again.”

The Grade-A heritage listed Theatre Royal was the only surviving Edwardian style theatre in the country. The building was saved from demolition in the early 1980s, refurbished and upgraded to World Class theatrical production standards in 2004 and renamed ‘Isaac Theatre Royal’ after re-opening in mid 2005.

The 2014 Reopening Season at the Isaac Theatre Royal will include performances from the Royal New Zealand Ballet, the Christchurch Symphony Orchestra, Kostroma Russian Dance Company, Southern Ballet, a touring play and a concert from one of Britain’s iconic folk/rock bands of the 1970s which will be announced very soon and go on sale on Monday 16th June, along with various local community events.

Tickets for the Vodafone Royal New Zealand Ballet season of A Christmas Carol will go on sale almost immediately for the opening week in November. Their season will also engage the services of the Christchurch Symphony Orchestra, who then in turn will stage their first performance on stage at the ITR for many years with A Cantabrian Christmas on Saturday 20th December, featuring Benjamin Northey as conductor, soprano Madeleine Pierard and Consortia, the University of Canterbury Chamber Choir.

The rebuild and restoration of the Isaac Theatre Royal has been possible through the support of many individuals and funding organisations.

After insurance to the value of $23 million funded approximately 60% of the project, the Theatre Royal Charitable Foundation has fundraised or been granted an additional $13 million to the overall $40 million cost with the largest contributions being from NZ Lottery Commission who collectively between their Significant Projects and Environment and Heritage Funds have funded just over $8 million to the theatre’s recovery. 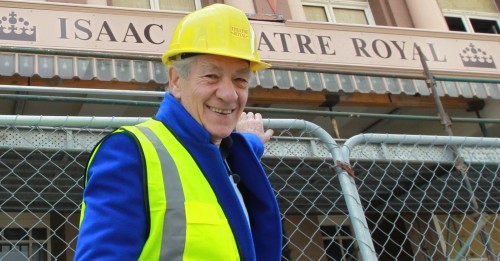 The Christchurch Earthquake Appeal Trust contributed $3 million, the Canterbury Earthquake Heritage Buildings Fund a further $500,000 and the Canterbury Community Trust granted $300,000. Additionally the Christchurch City Council funded $300,000 from the Mayoral Earthquake Relief Fund and have also loaned the theatre a further $2 million towards the project. The current shortfall of approximately $4 million can be partially underwritten by commercial loan facilities but the Foundation continues to actively investigate fundraising initiatives to minimise any loan requirements.

However, the contributions that created global news were from some very esteemed international stars of stage and screen. In May and June 2012, Sir Ian McKellen toured his one-man show Shakespeare, Tolkien and You around New Zealand performing 15 sold out shows single-handedly raising more than $350,000 for the ITR. The tour culminated at a packed Opera House in Wellington attended by the key cast members of The Hobbit trilogy who ‘shook buckets’ at the exits collecting more than $11,000 in further donations between them.

Sir Ian commented at the launch of the tour “theatres are places of gathering, happiness, celebration and experiences; places for sharing of stories, laughs, smiles, community spirit and friendship.”

Sir Ian signed autographs and smiled for photographs for well over an hour after every performance on the tour and returned to visit the progress of the rebuild in June 2013. He remains a true friend of the theatre and a global ambassador of the rebuild project.

The theatre’s famous 1908 hand painted canvas ceiling dome has been painstakingly restored to its original glory and has been a key focal point of the restoration for many of the theatre’s supporters.

Italian restorer, Carolina Izzo and her team have cleaned the canvas panels individually of more than 100 years of dust, grime and nicotine and have revealed the true beauty of the painting for the first time in more than a century. The painting inspired by scenes from Shakespeare’s A Midsummer Night’s Dream is now considered to be the largest of its type still existing in Australasia and will be a major attraction itself in the rebuilt theatre.

The original façade of the theatre has also been stripped of six coats of paint and will be restored to its 1908 appearance of red brick with white Oamaru stone columns and capitals. It will be the first time in many generations that the Theatre Royal will have its original ‘face’ once again, one of very few original heritage facades still existing in the Christchurch city centre.

Many other key heritage features have also been retained and restored including the marble staircase between stalls and dress circle levels as well as original leadlight windows and royal boxes.

Outside of a massive upgrade to structural strengthening meeting 100% of new seismic building codes, the rebuild also includes some significant enhancements to the pre-quake theatre’s functionality including the installation of a much desired elevator facility to all levels of the theatre, opening up the top two levels of the historic venue to all members of Canterbury community for ease of accessibility.

An hydraulic stage lift platform has allowed for the front of the stage to be extended a further 2.5 metres into the auditorium in front of the proscenium arch providing significant improvement for orchestral and choral performances at the venue. When not in use, the platform can be situated at auditorium floor level allowing for an additional two rows of seating at the front of the stalls level.

In conjunction with the New Zealand Film Festival Trust, a separate fundraising initiative has ensured that the Isaac Theatre Royal will be cinema compatible once again, with a new digital projector, film screen and surround sound capabilities to become the annual Christchurch home of the New Zealand International Film Festival from 2015.

As with any heritage theatre venue though the most spectacular level is the Dress Circle and probably the most significant enhancement is the addition of a brand new 175 metre2 separate multi-functional flat sprung floor performance space adjacent to the theatre’s existing Dress Circle foyer providing an additional venue for small theatre productions, rehearsals, concerts, expos, seminars, meetings, weddings and banquets, presentations, small conferences, exhibitions, catwalk events, social functions, and recitals.

Cox, who also addressed the Asia Pacific Venue Industry Congress in Melbourne last week, concludes “when we look back on the last four years, the whole team involved in the theatre rebuild would like to draw on Sir Ian McKellen’s comments and ensure that the reopening of the Isaac Theatre Royal will make Christchurch smile again every time the public of our recovering city experience the splendour and joy of our rebuilt Grand Old Lady.”