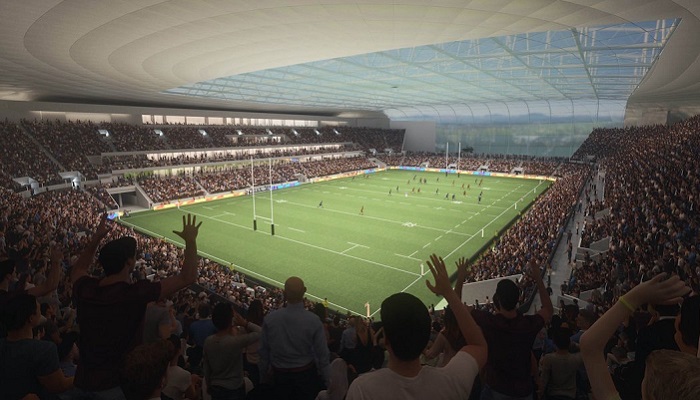 Christchurch City Council is moving forward with its consideration of the development of a new 25,000-seat multi-purpose stadium and will consider an investment case for the new venue later this week.

Following suggestions that a new city stadium could cost up to $1 billion, the Council is to consider a stadium costing $473 million, with a mostly clear roof and the provision that temporary seating could be added later.

The long-awaited investment case for the stadium, released today, sets out how the city can have the stadium it wants within a budget of $473 million, including running costs.

To be built in a city centre location, the rectangular stadium would serve as one of the anchor projects included in the Christchurch Central Recovery Plan.

Looking to now secure backing from the New Zealand Government, the Council has pledged to provide $253 million in its 2018-28 Long Term Plan as a contribution towards the construction costs.

The land on which the stadium would be built is owned by the Crown, which has said it would contribute $220 million towards the project, although it is waiting on the investment case before confirming the funding.

Net operating costs for the stadium, including lifestyle costs, are anticipated to be $4.2 million a year and the Council has allocated $4.1 million within its Long Term Plan to cover this.

The Council would deliver the project once a funding agreement has been reached with the Crown, before appointing a project board who would then appoint a delivery team to pull together consortia of contractors to build the stadium.

“Without an arena Christchurch cannot host big concerts or top-level sporting events. These events attract visitors and revenue to the city and are important for economic development. They also add to residents’ quality of life and make Christchurch an attractive, vibrant place to live.

“At the moment we are not capturing our share of economic benefit from cultural and sporting events. A new arena will provide an anchor and catalyst for CBD recovery and revitalisation and provide a focal point and an attraction for local and international visitors.

“Modelling undertaken for the investment case conservatively estimates that stays in Christchurch will increase by nearly 100,000 bed-nights per annum because of the domestic and international tourism driven by the new arena.”

If approved, it is hoped that work can begin on the project in the second quarter of 2020, with a tentative opening date set for 2024. Council-owned entity Vbase is the proposed operator of the stadium.