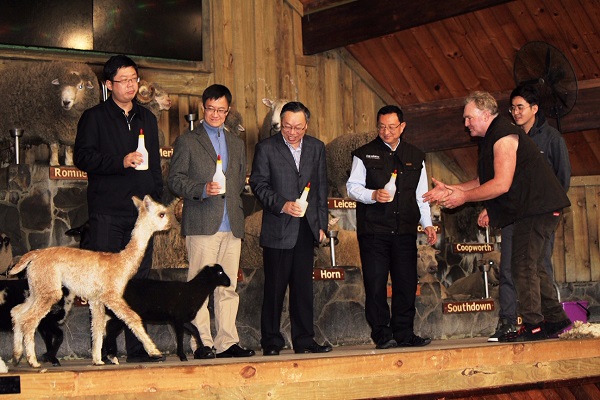 China’s Minister of Culture and Tourism was treated to a taste of Kiwi farm life and an up-close experience with New Zealand’s national bird during his visit to Rotorua this week.

Minister Luo Shugang is currently in New Zealand for the launch of the 2019 China-NZ Year of Tourism, an initiative aimed at strengthening the economic ties between China and New Zealand through tourism.

While in Rotorua, Minister Luo visited Agrodome and Rainbow Springs Nature Park where he was welcomed by local iwi Ngāti Whakaue.

At Agrodome, Minister Luo took part in a sheep shearing demonstration, before having the opportunity to feed baby animals from the nursery.

Minister Luo also visited Rainbow Springs where he enjoyed a guided tour of the nature park and the National Kiwi Hatchery, the largest kiwi hatching facility in the world.

Agrodome and Rainbow Springs are both owned by Ngāi Tahu Tourism, one of the leading tourism operators in Aotearoa with 12 other businesses.

Ngāi Tahu Tourism General Manager Experience Operations Emma Gardiner says “It was a privilege to host Minister Luo during his time in Aotearoa and we were delighted to be able to show him a glimpse of life on the farm and introduce him to our national taonga (treasure), the kiwi.

“Manuhiri (visitors) from China are Ngāi Tahu Tourism’s biggest market and, given this year is the China-NZ Year of Tourism, our focus will be on continuing to promote experiences that Chinese manuhiri will enjoy.”

Ngāi Tahu Tourism is a subsidiary of Ngāi Tahu Holdings, which is governed by Te Rūnanga o Ngāi Tahu.