China on the edge of leisure building explosion 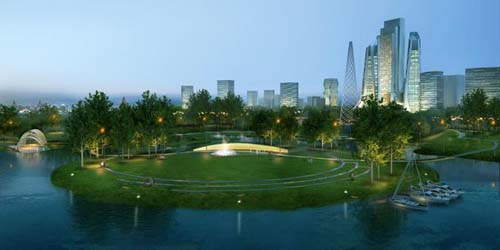 A feature in the Wall Street Journal suggests that China is on the cusp of a leisure-building explosion.

According to Wall Street Journal writer Wei Gu, with growth in China's domestic real estate market slowing and shopping malls saddled with vacancies, major developers see leisure as "the next big thing", citing the commencement by the Dalian Wanda Group, the country's largest commercial developer, of a 40 billion yuan (US$6.5 billion) 'cultural tourism city' and the likely impact of the Shanghai Disneyland.

On Hainan island in southern China, Mission Hills Group has built its a massive 22-course golf complex, in addition to 168 hot-spring pools. China still has only five million golfers, so to attract players, Mission Hills operates as a public enterprise rather than as a private club.

The Dalian Wanda Group has plans to develop up to 10 gigantic theme park resorts in less than a decade, with state-of-the-art attractions designed to draw crowds.

Its first, the Wuxi Wanda Cultural Tourism City project in Jiangsu province, will include the world's highest and fastest roller coaster, an indoor children's amusement park, cinemas and shopping malls.

Theme-park attendance is growing fast in China. It jumped 25% in 2012 at Haichang Group's marine theme parks in Dalian, Qingdao and Tianjin, compared with 6.7% on average for the world's top 10 theme-park companies.

Unlike in the west, where resort areas are often located away from population centres, resorts in China are surrounded by people. Hainan island, China's golfing capital, has a population of 8.8 million, six times that of Hawaii, and received 2.6 million visitors just during the Lunar New Year holiday week.

Developers are betting on tourism because it is growing 10% a year even as growth slows across the economy, and because they expect Chinese to travel more. Chinese average two vacations a year, compared with four for Americans.

And the trend is toward more short holidays, which favours domestic travel. The Government in recent years cancelled a traditional weeklong holiday in favour of more long weekends. Given a few days off, developers' expect that people will seek nearby escapes from their polluted, high-stress cities.