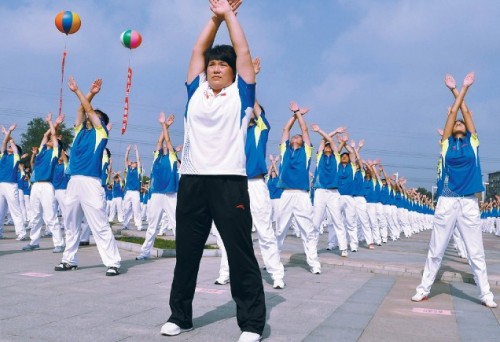 China has marked the second anniversary of the opening of the Beijing Olympic Games by staging its National Fitness Day.

Launched in 1995, as part of China's National Fitness Program, the initiative aims to improve the health and physical condition of the population. The program encourages everyone to engage in at least one sport actively every day, learn at least two ways of keeping fit and have a health examination every year.

While there are more than 850,000 gymnasiums and stadiums in China at present, most of them open to and widely used by the public, National Fitness Day saw China's Sports Minister pledge that the Government will build more sports facilities and train more fitness instructors, illustrating a growing interest in the health of the populace.

Commenting on the anniversary, Yang Xinwei, the China Daily's chief sports commentator wrote "I believe China's sports officials would exchange Olympic medals for an overall upgrade in the public's health.

"I don't mean to say winning Olympic medals is not important - Olympic victories raise the people's morale and give them a sense of pride. They actually help China carry out the National Fitness Program by inspiring the public to take up sports and raise their awareness of doing exercise to keep fit."

Xinwei also highlighted that "training facilities for China's champion athletes used to be mysteries to the public.

"That is no longer the case as more venues, previously reserved for national team athletes, become open to the public. Stadiums and gymnasiums in the National Sports Training Center, which has churned out hundreds of Chinese world and Olympic champions, hosted more than 180,000 people last year."

The Chinese Government has invested billions of dollars in installing outdoor fitness centers throughout the country, all furnished with fitness equipment and facilities. It has also stipulated that 60% of the proceeds from the sports lottery must go toward the National Fitness Program.