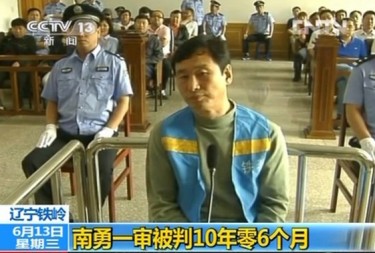 China has jailed two former football chiefs, national team players and even referees in the toughest crackdown yet on rampant corruption in the sport.

Former Chinese Football Association Executive Vice-Presidents Xie Yalong and Nan Yong were each sentenced to 10 and a half years for taking bribes by a court in Tieling in north-eastern China.

The crackdown on corruption was ordered three years ago by the current Chinese leader, Hu Jintao, who said he was "very concerned" about the state of the game.

Football is popular in China, but the state of the game nationally is a source of shame, despair and scathing humour for its fans.

The national team has qualified for just one FIFA World Cup - when it was knocked out at the group stage in 2002 without scoring a goal. It was eliminated in the early qualifying rounds for the 2014 World Cup and is ranked 73rd in the world.

Several other verdicts have also been delivered in similar cases in other cities, Chinese media reported.

In Dandong, a former national team captain was also sentenced to 10 years and six months in jail and fined 200,000 yuan.

Four former national team players were sentenced in Shenyang for to up to six years' jail and fined 500,000 yuan for taking bribes and match fixing.

Referee Lu Jun, who officiated at the World Cup, was jailed in February for receiving more than $128,000 in bribes to fix the results of seven football league games.

Some commentators have suggested that there could be a bigger political agenda at work.

Xi Jinping, the man widely tipped to become China's next President is reported to have set his sight on an international footballing trophy.

However, many fans complained that the punishment was too lenient and that harsher action was needed to root out the problems.