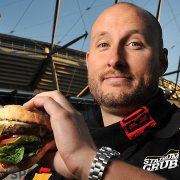 In his blog on the official Masterchef Australia website, 'Big Kev' Perry has described his 'food dream' as "the perfect pie, a better burger, gourmet grub served in the most convenient way possible so we can get back to our seats and enjoy the game."

Since his elimination from the Masterchef kitchen, Big Kev has, according to the blog, spent his weekends visiting stadiums and speaking to sports fans about their game day food experiences, confirming his suspicion that he is not alone in his desire for better 'footy food'.

Big Kev has developed a website where he has posted a comical Youtube video in which is explains the premise of 'Stadium Grub' and invites people to connect with the campaign via social media pages, Facebook and Twitter.

Through social media, he is collecting names and anecdotes from various stadium goers about food quality and convenience which, according to an article in Sydney magazine The Beast, he intends to present to these stadiums with a view of developing some viable solutions.

At the core of this campaign is an issue that Big Kev conveyed to the Northern Star "the food should add to the experience."

Negative game day experiences including poor quality food or a 20 minute queue detract from the entertainment and enjoyment of the consumer. They are also the factors that the consumer is most likely to remember and tell others about.

Wayne Middleton of risk management experts Reliance Risk suggest that "from a reputational risk point of view, Big Kev is onto something!"

The Stadium Grub campaign is also an example of the power of leveraging celebrity and social media to make a statement to an entire industry.

The venues industry is relatively powerless to control the stories and images posted on Facebook for example that suggest poor quality of stadium food, or the comments Big Kev himself posts in Food Hub blogs linked to Australia's Masterchef.

Middleton suggests "the negative attention that this campaign has begun to generate is something stadiums should keep monitoring. With a catchy jingle and some other celebrities on board, this campaign has potential 'to bite'."

For more information go to the Stadium Grub Facebook page at www.facebook.com/StadiumGrub