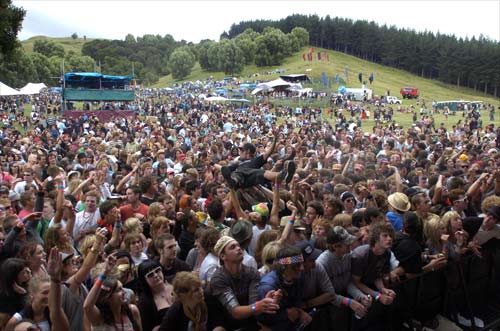 Following alcohol-fuelled violence which led to 63 arrests at the 2014 Gisborne New Year's Eve festival, alcohol limits will be strictly enforced at this year's Rhythm and Vines music festival in Poverty Bay.

The annual Gisborne festival has announced that it will return for a 13th time on New Year's Eve 2015, but with some changes.

The BW Summer Festival, which ran alongside but separate to Rhythm and Vines, could not continue because of behavioural issues last year, organisers said.

In addition to the arrests at the New Year's Eve 2014 event, 83 people were injured at the campground-cum-music festival.

Rhythm and Vines founder Hamish Pinkham said that disturbances had forced the festival to change its alcohol policy, with the removal of the Waikanae beachfront camp site's BYO licence.

In its place, the 2015 event will be a new camping-only offering, with a significantly reduced capacity of 3,500. Previous festivals have catered for significantly larger crowds of 16,000 festival goers.

Explaining that festival organisers had worked on the changes with the police, Gisborne District Council and BW Campgrounds, Pinkham stated “we've all been working closely together to try to develop a model that's sustainable, to keep people safe and entertained for years to come."

Limited BYO would still be allowed at Rhythm and Vines' onsite camping, with a maximum of 24 cans of beer or two three-litre casks of wine per person over the three days leading up to the festival.

The team behind the festival are currently refreshing the festival that has become synonymous with Gisborne and summer for tens of thousands of young New Zealanders over the past decade.

While there will be less non-musical entertainment, organisers aim to “stay true” to their roots and secure plenty of cutting-edge international and local musical talent.

Tickets for the 2015 event are already on sale, with the festival’s line-up expected in late July.