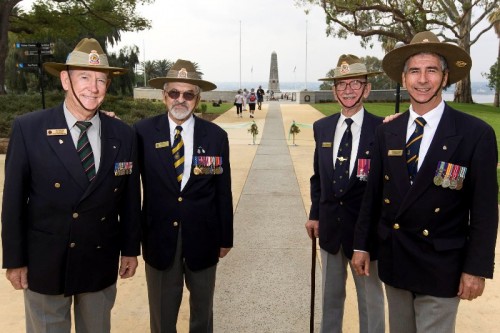 Minister Faragher said the new ceremonial walk was a significant improvement to the park that would enhance the overall experience for every visitor.

"Not only does the ceremonial walk make it safer for pedestrians, it also gives the Stateâs War Memorial the recognition and solemnity it deserves without compromising the original intent of the parkâs founders more than 110 years ago.

"This has been an important project, undertaken with the full support of the RSL.

"I am sure visitors to the park will appreciate the improved access between areas previously divided by a major road, as well as the unique opportunity to be fully immersed in a tranquil parkland environment overlooking the city and Swan River."

The ceremonial walk provides a paved pedestrian link between the memorial precinct, the Western Australian Botanic Garden and the parkâs premier tourism facilities. It is surrounded by open grassed areas and landscaped gardens.

Traffic has been re-routed away from the memorial, behind the restaurant precinct along a new road named Wadjuk Way to recognise the connection with the indigenous people who used to occupy the land.

• New pathways and extra lighting around the precincts;
• Improved set-down areas for people with disabilities;
• A dedicated tourist bus parking area;
• A new toilet block, four times the size of the one it replaces;
• More garden beds to showcase local flora; and
• Improved traffic management and car parking at the popular Forrest car park, near the large boab tree.

Minister Faragher added "we believe the ceremonial walk and the other upgrades will be significant improvements to the park that will further enhance its reputation as a tourist destination and landmark in Perth.

"Last year, Kings Park attracted 6.5 million visitors and this level of popularity can be expected to continue to grow."

For more information go to www.bgpa.wa.gov.au