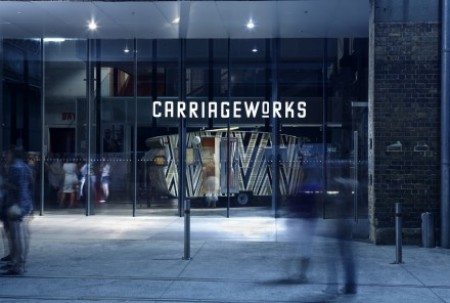 Sydney’s Carriageworks is reportedly proposing to add a 5,000-seat live music venue; a 200-seat cinema; a new area of public exhibition space and cafes, bars and restaurants to its existing venues as part of a $50 million redevelopment plan.

According to report’s in the Sydney Morning Herald, the ambitious six-year plan is part of a plan to put the cultural centre in the historic Eveleigh Rail Yards precinct on a par with Darling Harbour and the soon to be finished ICC Sydney’s theatre.

The Carriageworks Six-Year Strategy 2016-2021 report envisages the venue becoming a major cultural precinct with a dramatically expanded artistic program that will attract 2 million visitors and earn $15 million annually by 2021.

Carriageworks Director Lisa Havilah says she will seek Government funding as well as private investment to pay for the expansion at an estimated cost of $50-$60 million.

However, the precinct will be competing with many other NSW cultural institutions with building plans, including the Art Gallery of NSW, Powerhouse Museum and Campbelltown Arts Centre for funds.

The NSW Government has already allocated $202 million to the Sydney Opera House and $139 million to redevelop Walsh Bay from its $600 million cultural infrastructure fund.

The Six-Year Strategy, which will be released in April, involves renovating other buildings that are part of Eveleigh Rail Yards.

"It's all within the existing envelope of Carriageworks."

Buildings will be renovated to increase the size of the Farmers Market on weekends, add a weekday market and accommodate food events throughout the year.