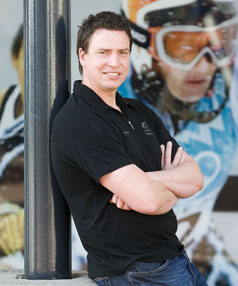 Loader (pictured above), who was born in Timaru, accepted the role from the Timaru District Council. It will see the international swimming star spearhead promotional initiatives and public speaking roles in Timaru as the Caroline Bay Aquatic Centre and its supporters club enters the 'fit out the pool' phase of fund-raising.

Loader is one of the greatest sportsmen produced by New Zealand. He won the Olympic 200 metre butterfly silver medal at Barcelona in 1992 and reached a climax to his career at Atlanta four years later, winning the 200 metre and 400 metre freestyle gold medals. He also won three world championship medals and six Commonwealth Games medals leading to him being named New Zealand's Athlete of the 1990s.

Loader said he was delighted to be associated with what will be a "fabulous aquatic facility" in the city of his birth and in which he trained while living in Dunedin during his lead up to Olympic stardom, adding that such centres were "an integral part of all of our lives.

"We are a nation of water lovers (and) my earliest memory of water was standing by the ocean in my fatherâs arms and him lifting me to jump the small waves that came lapping at our feet and him putting me down again as the water ran back out."

With New Zealand's intemperate climate, Loader believes that indoor water is needed to enjoy swimming all year round, adding "we are a country with the longest coastline in the world that is within three hoursâ drive for everyone who lives here.

"With such a high water profile, added to by the number of lakes and rivers that New Zealanders love to play in, it was absolutely imperative that everyone, especially the very young, had the opportunity to learn to swim properly. 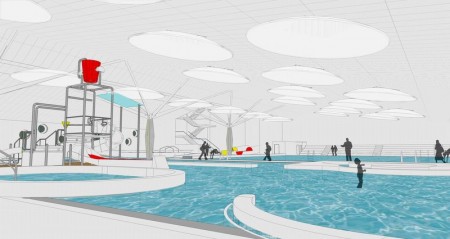 "It's a skill that everyone should have. You don't have to be an Olympic swimmer. What's important is that you have the ability to swim reasonably well to remain safe and enjoy our aquatic heritage.

He said it was important that aquatic centres provided other facilities as well to offer the total package.

"It's great that you will have a gym, a creche, a coffee shop and so much therapeutic water for people like the elderly who will love the warm water."

Loader said competitive swimmers would also have something really exciting to look forward to in 2012 when the centre opened.

He added "I remember coming to swim camps in Timaru with (coach) Duncan Laing when I was at high school in Dunedin and we would train at Century Pool in Craigie Avenue and at Maori Park where your new pool will be.

"Timaru does have a swimming culture and I enjoyed being part of that."

Timaru Mayor Janie Annear said she was delighted to have Danyon Loader on board, stating "we are just so excited that he has agreed to be our ambassador for the aquatic centre.

"He is an outstanding athlete and role model and we are extremely proud of the fact he was born in Timaru."

Lower image show the interior of the planned centre.