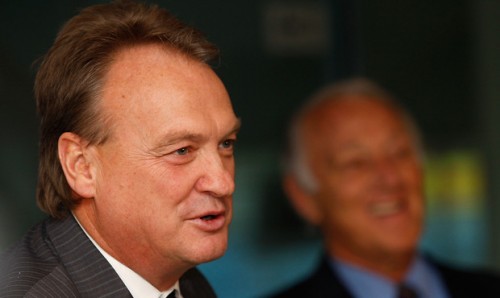 Cook, who is stepping down from his role as Geelong's Chief Executive after 23 years, has reportedly been courted by Carlton President Luke Sayers for some time, will take on the role in mid-October.

In a statement on his appointment, he advised “my first focus will be connecting with as many of our people as possible and making sure we are all aligned on how we are going push this football club to achieve the success it is striving for.

"There is no doubt that is going to take a lot of hard work, from a lot of Carlton people.

"In my experience though, there is absolutely no better feeling than when a group of people come together for one common cause and achieve the ultimate success.

"That thought should get every Carlton person excited for what lies ahead for their football club and we are going to share that experience every step of the way together."

Cook, along with then Geelong President Frank Costa, was crucial in turning around the Cats' financial crisis 20 years ago and then oversaw their three premierships in 2007, 2009 and 2011.

Liddle ended his near four-year tenure with Carlton last week following a reported "back me or sack me" demand following rumours that the club was planning to replace him with Cook.

Liddle joined the Blues in November 2017 after playing a key part in Richmond's commercial success over eight years. While his tenure has seen the club achieve recored membership and strengthen itself financially - reducing Carlton’s historical debt by $2 million as of early 2020 - the club has continued its finals drought which goes back to 2013.

Commenting on Liddle’s achievements, Carlton President, Luke Sayers advised "under Cain's leadership the club has cleared historical debt, significantly grown membership and commercial revenues, as well as introduced new non-traditional revenues, which now leaves the club in the strongest financial position we have been in for many years," Carlton president Luke Sayers said.

"Our players, coaches, staff, members and supporters can be incredibly grateful for the role Cain has played in placing the Carlton Football Club in the off-field position of strength we now find ourselves in."

Hocking is due to start in the next few weeks.