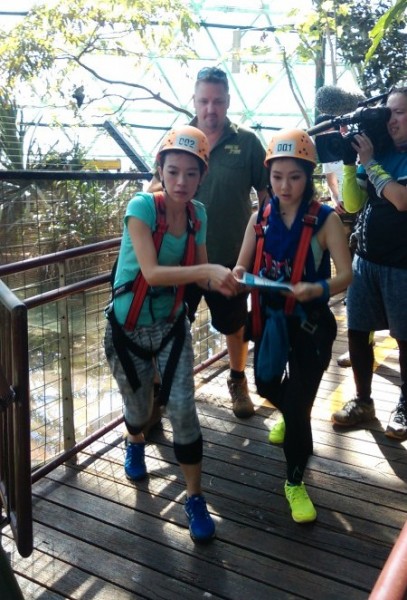 The CaPTA Group recently hosted China’s The Amazing Race, with the filming of a series of challenges in the popular global TV franchise taking place at two of the Group’s attractions.

Teams spent time at Rainforestation Nature Park, getting up close with native wildlife including spiders, lizards and butterflies and learning about Aboriginal history and culture.

The guides from the Pamagirri Aboriginal Experience worked with the teams as part of the challenges, teaching them traditional dances, spear throwing, and helping them to make fire and cook fish.

Tang and her teammate Zhang Yunjing completed parts of the Hi-ZOOM challenge ropes course, including ziplining over Goliath, the resident 4.1 metre saltwater crocodile.

CaPTA Group Sales Manager - Greater China Jennifer McLean, said that the inclusion of Gloria Tang on this season of The Amazing Race was already having a positive impact on bookings.

McLean stated “Gloria Tang is very famous in China, and very influential, so Chinese visitors want to come to Cairns and do the same things she has done.

“As soon as people found out the show was filming in Cairns, we had a lot of our agents asking to book tours that would let visitors do the same thing as the show’s competitors.”

Since the episode aired on 17th July, The CaPTA Group has experienced an overall increase in bookings from independent travellers from China, particularly to Rainforestation Nature Park and Cairns ZOOM & Wildlife Dome.

McLean added “it is great news for us, and also for the region as it is bringing more visitors here - they want to experience their own Amazing Race.”