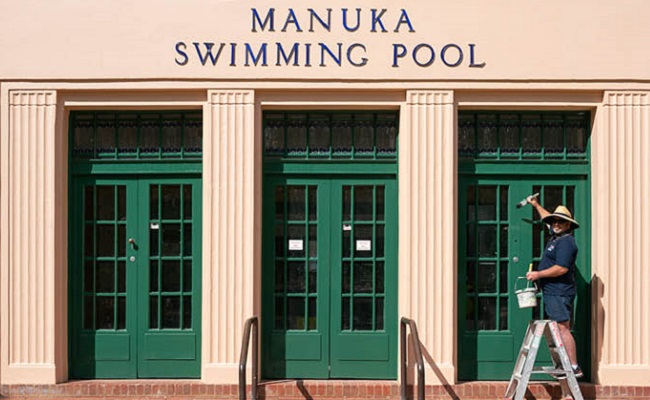 The ACT's historic Manuka Pool reopened to the community for its 89th swimming season at the weekend following a $2.42 million upgrade.

The historic facility, which first opened on Australia Day in 1931, opened for the season a month later than usual after a facelift that included re-tiling, new poolside seating, filtration upgrades and a coat of paint for the building.

All the restorations have been done with the original designs in mind, with the new tiles specially sourced from the Czech Republic to match the originals. The tiles also include hand painted depth markers and copies of the original ‘SHALLOW’ and ‘DEEP’ tile markers.

All works were in consultation with ACT Heritage and in line with the Manuka Pool Conservation Management Plan.

Upgraded by the ACT Government as part of a commitment to build and renew infrastructure across the city and to ensure it can be enjoyed by future generations of users, Canberrans were able to enter the facility for free on Saturday.

Commenting on the refurbishment, ACT Chief Minister, Andrew Barr stated “we hope to see many Canberrans visiting Manuka Pool to escape the heat this summer - taking part in swimming lessons, doing a few laps or catching up with friends and family.”

Originally named 'the Swimming Pool', Manuka Pool offers swimming lessons, casual swimming and lap swimming, a range of fitness offerings, opportunities for catch-ups with friends and family, and a refuge from the heat.

For more information go to www.manukapool.com.au

Image: Finishing touches being made to the upgrade of the Manuka Pool. Courtesy of the ACT Government.