Cambodian outrage at building of Angkor Wat replica in India 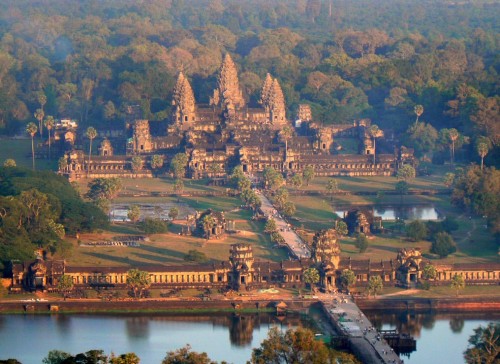 An international confrontation is looming over the building in India of a replica of Cambodia's massive Angkor Wat, the country's national symbol.

A Hindu trust in India has commenced a 10-year project to build a replica of Cambodia's most popular tourist attraction on the banks of the River Ganges.

A foundation-laying ceremony was held recently at the 16 hectare site in the eastern state of Bihar where the Bihar Mahavir Mandir Trust plans to recreate the temple's huge structure and elaborate stone carvings.

A Trust Secretary Kishore Kunaltold AFP that they intend the new building to be the tallest Hindu temple in the world, stating "it will be a replica of Angkor Wat but the temple will be slightly taller than the original."

Kunal said the plan was to "recreate Angkor Wat's grandeur and splendour" near the town of Hajipur, 25 kilometres from the Bihar state capital of Patna.

The UNESCO-listed Angkor Wat site in Cambodia contains the remains of various capitals from the Khmer empire and is a major international tourist destination.

The main temple was first dedicated to the Hindu god Vishnu when it was built in the 12th century before later being used for Buddhist worship.

The Cambodian Government has described the building of a replica as a "shameful act" that could affect its future relationship with India.

Cambodian Minister of Culture and Fine Arts Him Chhem stated "there is only one Angkor Wat in the world, it is the Cambodia 's Angkor Wat temple, which was listed as one of the World Heritage Sites in 1992."

Cambodian Government spokesman, Phay Siphan, said building a full-scale replica of Angkor Wat was a "shameful act" and a deliberate attempt to undermine its "universal value".

The Sydney Morning Herald has reported that Damian Evans, the director of Sydney University's archaeology project at Angkor Wat, as saying that Cambodians are predictably outraged about the project, "as I am sure Indians would be if a nearby country decided to build a clone of the Taj Mahal."

Dr Evans said building a replica showed a "remarkable lack of cultural sensitivity by this group in India, considering how central Angkor Wat is to Khmer (Cambodian) national identity."

India has many experts to call upon to build the replica, as archaeologists from the Archaeological Survey of India carried out restoration work on Angkor Wat between 1986 and 1992.

Explaining the motivation for building the replica Kishore Kunal of the Mahavir Mandir Trust adds that Angkor Wat is the "most marvellous monument ever made by mankind and I just want to make the largest Hindu temple in the world."

The Trust, which has constructed a number of temples and hospitals in Bihar, is mainly funded by donations and has put an estimated budget of US$20 million on the project.

Kunal concluded "we cannot match the original in terms of the size of the entire temple complex. But we will try what we can with the land and the means that we have."