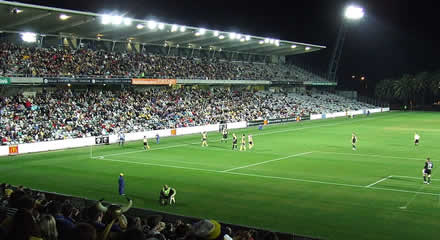 Immediately prior to the arrival of Cyclone Yasi, the self-appointed Cairns Business and Sporting Group met to outline its plans for a new sport stadium for Far North Queensland.

Meanwhile, Cairns Regional Council has also commissioned a $100,000 study into the cityâs need for a new stadium, with results due by in August.

Its initial discussions identified Gosford's Central Coast Stadium as the benchmark for a new rectangular stadium in Cairns, having been told that the Gosford Stadium (built in 2000 at a cost of $28 million) was an ideal model for a regional sports stadium.

• A suggestion to move athletics from Barlow Park to Smithfield and Edmonton to make the creation of a rectangular stadium easier;
• Relocating the Townsville-based North Queensland Fury A-League football team to Cairns; and
• Adding more business and sports leaders to the group.

The Group hoped to have its stadium plan included as part of Regional Development Australia's five-year Far North road map of projects to stimulate the regionâs economic, environmental and social development.

Entsch advised that he had met Federal Regional Development Minister Simon Crean who supported the group and urged him to present the plan to the RDA which would lobby for funds.

The plan is based on a four-year-old document prepared and costed by group patron John O'Brien who gifted the plan to the group. O'Brien's plan was for a multi-purpose stadium, not just for sport, but for other events, including concerts and trade shows.

Entsch believes that a carefully staged project could be funded over a 10 year period, linked to the next stages of the multi-million dollar hockey redevelopment in North Cairns, the roofing over four of the centre courts at the regional tennis centre and the next three stages of the $19 million Cazaly's stadium upgrade.

Cairns Regional Council Deputy Mayor Margaret Cochrane is to be invited to be part of the group, along with representatives from basketball, cricket and football and Ross Steele from the Cairns Convention Centre.

Rugby league representative John Moore said, while the group had discussed bringing North Queensland Fury to Cairns because there were too many national sporting teams competing for the same audience and dollar in Townsville, the problem was the lack of a rectangular stadium in Cairns.

Moore said league, rugby union and football in the Far North had joined forces to promote the stadium construction at Barlow Park.