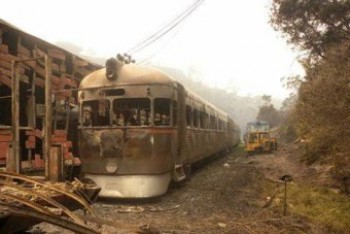 The historic Zig Zag Railway, located to the east of Lithgow, has been devastated by bushfires that ripped through the NSW Blue Mountains on Thursday.

Alexander Robinson-Mills, Director of the not-for-profit cooperative that runs the attraction, estimates that the fires have caused $4 million of damage, with trains, carriages and equipment have been completely destroyed.

Built in the 1860s, the narrow gauge railway was constructed to transport people and produce from the western plains of NSW to Sydney. It was replaced in 1910 by a 10 tunnel deviation after which the line began to be used as a visitor attraction, becoming the home of Thomas the Tank Engine and the Hogwarts Express in recent years.

In mid 2012, a range of safety and financial issues almost saw its closure but, over the past year, the Zig Zag Railway Co-op Ltd had set about rectifying these issues and was expecting to restart passenger services in the coming months.

Trust Chief Executive Michael Forbes told the Sydney Morning Heralnd that he was "bloody gobsmacked" as he toured the burnt facility on Saturday.

Forbes added "we've had fires before but this is the first one that's gone through the workshop, the first time we've suffered damage to this extent."

A caretaker living on the railway site had lost her accommodation and most of her possessions.

Robinson-Mills indicated that the attraction is covered for its losses by insurance, telling the ABC "we do have some insurance for the things that were destroyed.

"We are unable to make exact estimates, but we are estimating between $3 million and $4 million."

The Trust is expecting to rebuild the attraction based around its three station structures, which survived the fire.

For more information go to www.zigzagrailway.com.au/